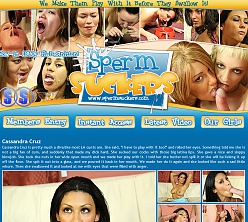 While they don't suck sperm exactly - they're not microscopic superheroines, after all - the women of Sperm Suckers certainly do wrap their lips around a stiff dick, working and then draining it of its essential liquid essences. Whether shot straight into their mouths or first deposited into a cup, glass, bowl, spoon, straw, or whatever else is handy, the girls gulp down every last drop of their presented load with what appears to be (but could very well not be) glee. Sperm Suckers is a wild and often challenging site devoted entirely to the ingestion of ejaculate. Hold onto your lunch, fellas, 'cause this one's… well, kinda icky.

Pros:
Host to scenes of hardcore face-fucking that uniformly end with semen swallowing, Sperm Suckers could be the classiest site on Hardcore Doorway, but that's not saying much. The guys get blown skill before depositing their spooge in martini glasses, on tabletops, on the floor, in dog dishes, and any other receptacle they find, only to have their oral conquest chug and gulp it down, savoring every drop.

Many Hardcore Doorway sites only manage to attract lower-tier adult talent, but Sperm Suckers has surprisingly gathered a roster that includes some stellar adult performers. Charley Chase, the queen of cock-suckers, does great work here, as does Gaia, Harmony Rose, Zoe Holloway, Tricia Oaks, and Proxy Paige, among others.

Cons:
Sperm Suckers is desperately in need of a redesign; it not only looks dated, but doesn't offer a model index or any other navigational features that are integral to an easy, fluid browsing experience. And considering how many sub-par performers are here, it can be quite tedious rifling through the long update listing just to find a few golden girls.

Many scenes have been split between two updates, forcing viewers to wait another week (or however long it may have been between installments) just to see the culmination of what they've already started watching. Added to this, older scenes, those most likely to be split, didn't have the HD formats you see today, and instead looked quite poor at peak 496x368 pixels.