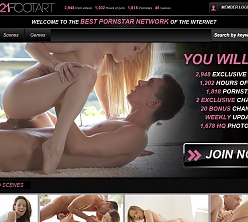 Overview:
Traditionally, the lower limbs of the human body are largely left out of sexual activity. Instead, it's the arms and hands that get most of the attention. Sure, there exists a good many people to whom a shapely leg is the ultimate arousal, but when it comes to actual touchy-feely business, most of the action takes place below the wrist. Not so for foot fetishists, of course, or the subjects of their desire. 21FootArt offers toe-suckers, heel-frotters, and sole-lickers a wealth of footsie action for quite a reasonable price. As part of the blossoming 21Naturals network, itself a sub-network of the far more famous 21Sextury, 21FootArt has a very solid base of operations and on its tour pages boasts of holding nearly 3,000 exclusive movies, 1,700 photo galleries, weekly updates, and 20 bonus "channels" providing a wealth of additional smut. Largely a European endeavor, 21FootArt's uniquely erotic scenes see irresistible women show off their dainty feet, use them as a seductive tool, and even incorporate them directly into intercourse. Costing $29.95-per-month to access, 21FootArt might seem a bit expensive for such a niche interest. Be warned, though: there's more to 21FootArt than you might assume.

21FootArt's focus on feet is by no means superficial or standoffish. Instead of simply admiring the models' personal perambulators from afar, 21FootArt's directors move in for closer looks as the feet engage in hardcore activity of their own. Foot massages, toe sucking, footjobs, oil slathering, toe insertion, and on-foot ejaculation are all featured acts.

Like all 21-branded adult sites, 21FootArt features stunning visuals in high resolution formats. Videos can be streamed or downloaded at 720p and 1080p resolutions, looking quite stunning thanks to the artfully captured photography and simply atmospheric bedroom sets and outdoor locations. Image galleries provide online viewing and downloadable zips, the latter available in both the standard 1280px and a high-res 5760px set.

Cons:
Updates to 21FootArt's burgeoning archive only come once every two weeks, leaving members with nothing new to see between episodes. The site is still quite small and holds only 47 scenes. Its inclusion in the 21Naturals network doesn't exactly bring members to a thriving super-collection, either; the network holds only 180 scenes, 21FootArt's meager contribution included.

Advertisements occupy too much space on 21FootArt's pages and, most frustratingly, push you towards sites that could (and perhaps should) already be available to paying customers. 21Sextury and 21Sextreme are the larger of the three sub-networks operating under 21Sextury's marquee and they remain inaccessible to 21FootArt and 21Naturals members without additional payment.