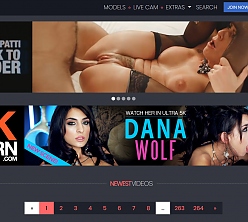 Whether it’s Ryan or another guy receiving the pleasure of his co-stars company, it’s those co-stars that will have you standing at attention in no time at all. Recent appearances from Skylar Vox, Savannah Sixx, Texas Patti, Melody Marks and Paige Owens have all been standouts but the roster of impressive performers runs much, much deeper.