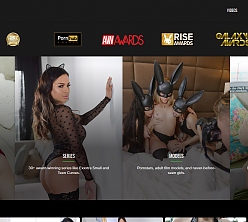 In rich High Definition formats, Team Skeet brings its members clear imagery in 1080p and 720p streams and downloads. Though stopping short of Ultra-HD resolutions, these HD videos rarely disappoint and shouldn’t leave too many members feeling like they’re missing out.

New scenes land at Team Skeet HQ every day, three on most days, pushing the already huge 5515-scene archive to new heights. New sites are also being added to the network quite frequently (every three or four months). This keeps Team Skeet growing and expanding in a very pleasing way.

Cons:
Of the new and original creations that were added to the Team Skeet site roster over the past few years, some didn’t last very long on the update schedule and soon appeared to be little more than limited series. It’d be great to see new sites last longer and keep informing the growth of Team Skeet.

Many of Team Skeet’s toughest competitors are currently throwing they weight behind 4K Ultra-HD content that drivers astonishing detail and dynamic footage to viewers. Team Skeet is perhaps sitting a little too comfortably on its 1080p HD peak video resolution and could stand to make a 4K upgrade soon.

Quite a few channels are held behind an additional paywall. Labelled Premium Channels, such outlets as Shoplyfter MYLF may be available on the MYLF network as well as Team Skeet. There’s so much crossover between the two networks that it’s bound to confuse some prospective members.