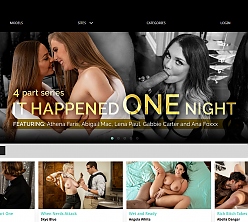 The stunning cast of Babes performers hail largely from North America and Europe, and include such notables as Abella Danger, Kendra Spade, Lexi Luna, Carly Rae, Alina Lopez, and Australian goddess Angela White. Few studios manage to make their models look so consistently elegant while still having them conjure filthy thoughts in viewers’ minds as Babes does, giving these models a brilliant showcase.

Babes may look stunning in 1080p HD streams and downloaded videos but, uh, it’s getting a bit behind-the-4K-times, to be quite frank. Many adult sites have been plowing the 4K fields of Ultra-HD resolution for years while Babes has seen fit to sit at 1080p just a little too comfortably. Surely the original sources are at least 4K - perhaps a UHD remaster series would fill the production downtime during COVID.

While it’s great to see a bonus site come on board to satiate hungry Babes subscribers, Twistys Hard and its 570-odd scenes just don’t make a great fit. What’s more, they’re not exactly brand new productions, the most recent having landed here and at Twistys Hard over a year ago. Maybe one more bonus site would help ease this annoyance.