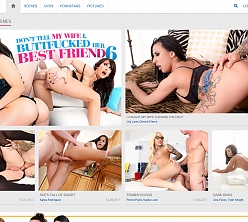 Overview:
The dark lord Satan may have inspired fear and terror in the hearts and minds of many religious folks, but in this day and age it can seem absurd to even believe in such a creature. Surely humans are the ones responsible for the evil deeds usually said to spring from this demonic entity! Whether or not he holds any sway in your life, the devil (or at least the idea of him) has been somewhat responsible for a wild assortment of adventurous carnal entertainment. And, nowhere is said smut more perfectly displayed in honor of the master demon than at Devil’s Film. An infamous site once part of the Fame Digital network, Devil’s Film now sits on the newly minted Adult Time Network but continues to deliver what it’s most well known for: interracial sex, gangbangs, orgies, wife swapping, trans-sex, step-cest, squirting orgasms, and various other kinky activities. Offering members, who pay $29.95 for regular monthly access, a huge archive that’s now being outfitted with 4K Ultra-HD videos, an archive already holding such salacious series as Neighborhood Swingers, Transsexual Babysitters, Her First Older Woman, and Blacked Out, and a cast of interminably sexy, undeniably deviant professional and semi-pro sluts, Devil’s Film is damn hard to resist.

Just what can you expect your favorite stars to be seen doing at Devil’s Film? Well, Abella Danger licks plenty of ass both male and female, Charlotte Stokely works her magic oral skills on a parade of new sapphic starlets, Leigh Raven takes on four hulking black men, and there’s more tranny assholes invaded here than you could ever hope to squeeze into one extended viewing session. In short, this is high deviancy!

Something new and decidedly nasty (in a good way) lands at Devil’s Film almost every day, adding to the huge 8296-scene collection already sitting here waiting to be devoured. And, if you find yourself running out of devilish fun, there’s an even wider world of carnality awaiting thanks to the now included Adult Time Network access which, with Devil’s Film now discounted to $14.95, makes this a killer deal!

Cons:
Since Devil’s Film was absorbed into Adult Time, the layout and design has become uniform, yes, but navigation now tends to lead you all over the place. Devil’s Film itself had a number of sub-sites or series. Adult Time has more than 150 channels and can be quite disorienting if you don’t keep your wits about you.

Whether you enter a room from one door or another shouldn’t really matter: you’re still inside. For Devil’s Film subscribers entering the site the old way, 4K videos will seem like a blatant case of false advertising. Those entering through Adult Time - which I’d strongly advise over the old route - will find copious 4K vids on hand.