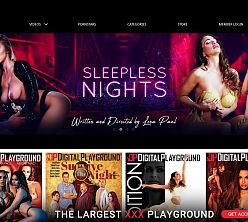 Rich visuals are delivered here in High Definition streams and downloads reaching 720p and 1080p. Though falling short of the looming 4K standard, Digital Playground nevertheless has some of porn’s most skilled cinematographers working on its sets. Many movies are so visually impressive you’ll never even notice the absence of a 4K option.

Updates land at the already plentiful Digital Playground archive twice weekly, sometimes more often. There’s already well over 4000 scenes online and waiting to be discovered, much of that archive in 1080p HD. When you factor in a very tasty discount offer - $9.99 for a full month of unrestricted access - Digital Playground is one of the hottest tickets in town.

As excellent as Digital Playground’s online collection is - and it really is an amazing archive of premiere smut - the studio is so popular it’s material can be found elsewhere on mega-sites and cross-company networks. Not in this quantity or delivered with as much style, sure, but Digital Playground cannot be said to be absolutely exclusive.