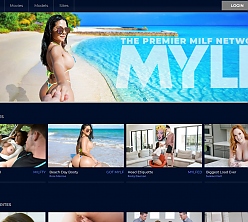 MYLF doesn’t dick around with its videos and instead provides members with excellent options for streaming or local viewing. Hitting 720p and 1080p resolutions, the HD MP4 videos bring strong detail to your screen regardless of the concept or scenario at play. No MYLF sites yet feature 4K video, but the High Definition options are certainly nothing to sneeze at.

Already holding more than 600 scenes across its 23 sites, MYLF is a booming network from the same folks behind Team Skeet. New scenes are added two, three, or four per day and ensure members are never left waiting between episodes longer than a few hours. Discounted to $19.87 a month, a MYLF membership also won’t break the bank!

Connected to MYLF by concept and company but not directly accessible to members, new sites are popping up all around MYLF. Labelled premium upgrades, such sites as Shoplyfter MYLF, MYLFDOM, and BBC Paradise must be paid for before you can access their thrilling updates. Having a few premium sites is usually fine but MYLF is pushing quite a few upsets this way.

Team Skeet is a network teeming with sordid, racy sex scenes on a myriad of concept sites. Unfortunately, though MYLF and Team Skeet share creators, parent company, and servers, the two networks remain separate. MYLF members do not get free access to any Team Skeet sites or content, nor vice versa.