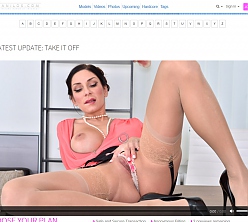 In High Definition video streams and downloads, Anilos delivers 720p and 1080p views of its cast, the videos offering strong detail and capturing a variety of tangible moods. Photo galleries are as much as part of Anilos as videos and they also look very good at peak resolutions of 3600px available online or zipped.

Adding another dose of marvelous mature sexuality everyday, often multiple times daily, Anilos is very active. Hosting an archive of nearly 3000 scenes and 3000 photo galleries, Anilos is just as fruitful and abundant as the libidos of its starring women. Now discounted to $19.94-a-month for Mr. Pink’s readers, Anilos is also quite the catch where your wallet is concerned.

Anilos does not offer its members access to any other company sites operated by Nubiles. Members are shown a variety of deals that will save them money on those sites, but direct access has not been provided. Anilos is quite large and should keep most users well fed with fresh and archived smut but those demanding network access almost as a right will not be pleased.