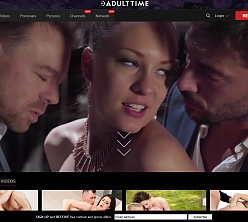 Pros:
The impressive cast of carnal performers giving their all for 21Sextury’s members include the cream of the crop of European sex goddesses. Anya Krey, Misha Cross, Anissa Kate, Henessy, Tiffany Doll, and Kaisa Nord represent the European continent with pride while a smattering of North America’s hottest talents contribute some of their hottest Euro-inspired sex.

21Sextury is no slouch when it comes quality, that’s clear, but how’s the quantity component faring? Pretty damn well, actually! 21Sextury’s huge collection covers a wide range of sexual acts and styles while keeping with the house style, and does it to the tune of more than 10,000 scenes. Adult Time access, included free for all 21Sextury members, allows for a truly staggering amount of smutty, sordid viewing at no extra cost.

Cons:
21Sextury was once its own network, not just a part of Adult Time. It’s a bit difficult to tell if absolutely everything from the previous iteration of 21Sextury has made it across to this new incarnation. Even if that is the case, Adult Time’s browsing tends to push you towards suggested content and makes single-21Sextury-site viewing largely a thing of the past.

Scenes are delivered with little text to accompany them. If you want or need a decent preview of the action before committing to a download, you’re left with the photo galleries and video streams from which to base your selections. Likewise, the precious little info given on the performers themselves will have you turning to outside sources to learn more about your new favorite fuckers.

Some of the older 21Sextury properties, many of them fan favorites, no longer produce new content. Devoted fans of Sweet Sophie Moone, Nude Fight Club, and Only Swallows are among those left in the lurch and looking for a new favorite 21Sextury outlet. With some of these sites focused on now-retired performers, we can’t expect them to be revived anytime soon, or at all, really.

Conclusion:
21Sextury has a long history of bringing members world-class Euro-porn starring the Continent’s finest adult performers and with updates landing most every day and now reaching 4K Ultra-HD resolutions, it seems this acclaimed hardcore network is only getting stronger. Now integrated into the Adult Time super-network, 21Sextury has lost a little of its copious personality - also missing is crucial scene synopsis and model profile information - but will nonetheless keep you enthralled with its vivacious yet often sweetly erotic sex. From insane DPs, gangbangs, and group sex sessions to lesbian experimentation and intense solo turns to narrative epics that see top Euro stars play their lusty roles perfectly. Along with the HD and UHD video streams and downloads, 21Sextury also provides high-res image galleries with every scene update to bring everyone, even still photo fans, excellent views of the lascivious teasing intros and steamy hardcore action. Now under the Adult Time banner, 21Sextury also offers its members far more bonus content than it ever has in the past, making this a Euro-focused entry point into one of online porn’s largest and most impressive collected archives. Even among the many other stellar Adult Time channels, though, 21Sextury proves itself a genuine porno powerhouse.