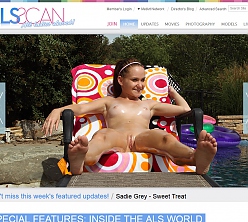 Pros:
ALS Scan features a cast of women at various stages of professional success and notoriety. Notable hardcore stars like Riley Reid, Zoe Bloom, Paige Owens, and Kiara Cole have all appeared here recently and the archive is loaded with other top stars before they really cemented themselves as AVN contenders (and winners). Lesser known and total newbie performers also appear.

With 4K video downloads appearing on the regular now, and with a solid archive of very strong 1080p HD videos in stow, ALS Scan is well and truly an Ultra-HD extravaganza! Photo galleries don’t slouch on the detail, either, with multiple resolutions available online and in zipped sets, peaking at 4182px.

ALS Scan promised daily updates and that’s exactly what it delivers, alternating between photos one day, a video the next. Already holding around 2000 videos and 3,152 photo galleries, it’s unlikely you’ll ever run out of clean snatchy smut here. And with a discount offer letting you inside for just $19.99, ALS Scan is made even more appetizing!

Cons:
It appears access to the Met Art Network to which ALS Scan is fairly closely tied still hasn’t been made automatically available to ALS’s members. What is provided is a small curated collection of some solid content from these other Met Art sites. While not as impressive as the network access HQ seems intent to hold over regular members’ heads, this bonus smut is a welcome addition.

ALS Scan went through a period where it was adding a hardcore sex scene in every other update. While still arriving at a rate of about one each month, hardcore content didn’t quite take over ALS Scan as much as many hoped it would. Those who prefer the solo scenes still get their way, but hardcore fans might appreciate a little more action.

Some of the activities featured at ALS Scan will boggle the minds of many viewers. After all, how many of you have been chomping at the bit to see a young woman use clothes pegs and an embroidery hoop to hold her pussy lips open? How about gorgeous young lady who shoves kitchen glassware inside her most delicate parts?

Conclusion:
Having long since abandoned a strictly solo premise, ALS Scan seems to have expanded into a wide range of territories all somewhat connected to the glorious visions of shaven or waxed female genitalia that earned it its reputation. From lesbian fisting bouts, tool-aided gaping, and self-fucking with all manner or toys to the more simple and straightforward pussy adoration episodes, ALS Scan’s 1080p HD and 4K Ultra-HD videos offer crisp detail in each well lit scene. Photo galleries bring multiple resolutions to your screen and can be viewed online or offline via downloadable zip sets. It’s going to be quite clear as soon as you land at ALS Scan whether or not you’ll be into its highly varied approach to worshipping humanity’s most admired and desired sexual organ; embroidery hoops and clothes pegs aren’t for everyone, after all. If you dig its style and its expansive, exploratory archive, ALS Scan will feel like an oasis in a sea of overly hairy old ladies.