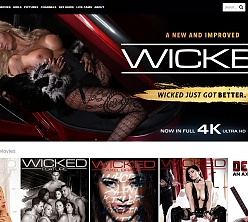 Now offering all of its new titles and scenes in 4K Ultra-HD formats at at 2160p resolution, in downloads and in streams, Wicked now looks even slicker and more gloriously vampy than it did peaking in 1080p HD. Photo galleries also provide excellent views both online or in downloadable zipped sets, in 1920px resolutions.

Wicked Pictures prizes its models seemingly above all else, celebrating their incredible sexual charms in grand style. Model profile pages are quite disappointing, though, as they’re devoid of anything more informative than links to the individual’s online Wicked work. No bio or personal stats or anything, not even for the contract Wicked Girls, has been provided.