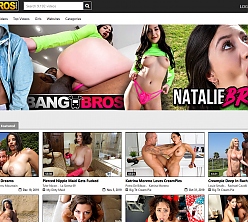 Pros:
The current roster of Bang Bros sites includes famous ones such as Bang Bros, Big Tits Round Asses, Bang POV, Ass Parade, and the utterly outrageous Public Bang. Some sites are very much American productions while others make use of a great Euro crew for extra global reach.

With updates landing every day, often twice daily, Bang Bros is always growing and expanding. Currently home to nearly 10,000 individual scenes, this network has so much to offer it’s almost guaranteed you’ll be thrilled with membership. The High Definition videos streaming and downloading at 1080p look brilliant, as do photo galleries, and there being 4K versions available is also great to see.

Cons:
The longer you remain a Bang Bros members, the more content becomes available to you. Bonus sites open up on a protracted schedule and you’ll need to stick around for quite a few months in order to open the smaller, less significant, but still hugely entertaining Bang Bros sites: Blacks on Moms, Black Patrol, Abuse Me, College Rules, Dancing Bear and others.

All new Bang Bros content comes with a 4K icon attached to previews, leading members to believe they’ll have an accessible 4K option. Without paying an additional $4.90 each month to unlock these Ultra-HD videos, all members are left with 1080p HD videos as their best and most brilliant option.

The Bang Bros network can be a bit of a drag to use, interrupting your browsing with overly sensitive security protocols. During the period of writing this review, I was logged out on multiple occasions and on others given a security error that suggested multiple IP addresses were in use. It’s a relief to see some networks focusing on security and privacy but the interruptions sure did become annoying after a while.