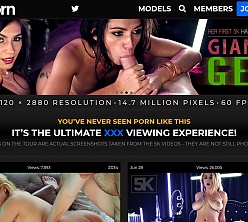 Clearly 5KPorn is a site that prizes visual and technical quality. Not only are downloadable videos available in 2K, 4K, and 5K resolutions that look utterly stunning, but so are 5KPorn’s streams. Gobbling up this gloriously cinematic rendering of seriously steamy sex is a cinch whether you’ve got terabytes ready to be filled or a strong broadband connection you want to thrash.

Bringing a weekly dose of Ultra-HD creampie-heavy carnality to the screen every week, 5KPorn is growing steadily and already has more than a dozen upcoming scenes at the ready. Each episode now online offers the main video, an excellent photo gallery, and often includes a behind-the-scenes or alternate angle of the action.

You can’t please everyone but sometimes it seems Ryan Madison doesn’t please many people at all. (Well, aside from himself and his onscreen partners, of course.) Complaints about Ryan’s talking, the way he holds women close while fucking them, and especially his orgasmic vocalizations are not exactly uncommon.

The video options provided by 5KPorn naturally focus on high resolutions and fast frame rates. The mobile-ready video option reaches 720p and may not be the best course of action for on-the-go viewing. A 540p or 480p “pocket-sized” version would be a great addition, even for those who merely want a full-scene preview. 5KPorn may be called 5KPorn but it looks incredible at almost any resolution.

Conclusion:
5KPorn’s archive may only hold 35 scenes at present but almost without exception, the collection offers brilliant photography with a moody, urban nighttime glam-tinged aura, incredible visual clarity, great verbal interplay and eye contact between performers, and some of the steamiest, most believable sex going today. (Well, you have to accept Ryan’s fucking style, of course, and not everyone can.) Shooting almost exclusively inside his partners, Ryan creams each cunt multiple times, cementing 5KPorn as a must-see for creampie and impregnation-fantasy fans. Long scenes with well-chosen angles that make the most of the hyper-detailed image quality are a joy to watch even if you’re not the biggest fan of Mr. Madison’s sweaty, overly hands-on style. 5KPorn is brilliant, bold, and bound to have you budgeting for a monitor upgrade as soon as you zip your pants back up.