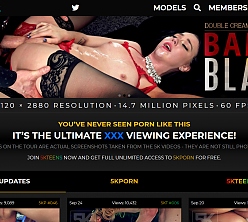 Although a small site on its own, 5KTeens doesn’t even need to stand on its own merit. Tied to 5KPorn, this site allows all its members to access 5KPorn’s content at no extra cost. At more than six times the size of 5KTeens current archive, 5KPorn is where the wealth lies - and you have full access!

Cons:
Logging in to 5KTeens actually just tosses you onto the 5KPorn homepage. Once inside either site there’s no difference aside from scene-to-scene branding. When most of the models seen at 5KPorn are “teen” starlets and newcomers, it does make the existence of both sites a little perplexing.

Anyone without a monitor or TV capable of Ultra-HD playback will never get the full 5KTeens experience. Watching this beautifully shot content in such incredible detail really does make a huge impression. Any viewer stuck in regular HD land will enjoy the added detail and marvelous, creative visual style but the lack of lower-res, lower-bitrate content may prevent some viewers from indulging. A 720p “mobile” version still hits 4 GB!

Instead of applying keyword tags to each scene in order to help you find your preferred sex acts and physical traits, 5KTeens instead only tags the video timeline itself. This helps you jump to a certain part of the scene but it won’t help you find similar content. More navigation options would be great to see here, especially since we’re essentially dealing with two sites.

Conclusion:
Aside from its obvious visual merits - the videos simply look fucking amazing, alright? - 5KTeens also brings some very steamy sex to your screen. Ryan Madison is a highly regarded performer who often brings out the best in his co-stars. Take his scene here with Bambi Black: tell me they’re not both having a seriously hot time! The visual strengths of 5KTeens are obvious and immediately apparent from the first video playback or gallery view but without the impassioned performances, it’d all be a waste. Thankfully there’s ample dirty talk, impregnation role-play, girls pleading with “daddy” for more, and Ryan’s verbal insistence on finishing deep inside their holes. 5KTeens is very small, just 7 scenes in total, but the included 5KPorn access more than makes up for that. Tying these two sites together may seem a little odd considering they’re essentially the same premise and treatment, but when you sit back and look at the collection brewing here, there’ll be no complaints at all. 5KTeens and 5KPorn together are fucking dynamite!