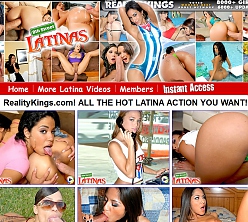 Short of heading to South or Central America for your own personal pussy hunt, 8th Street Latinas presents you with the most promising opportunity for nailing (vicariously, of course) some gorgeous Latin broad in a variety of positions, locations, and orifices. Brought to you by the famed Reality Kings network, 8th Street Latinas is packed with amateur and professional adult performers whose bodies, sexualities, and lust for satisfaction are all as caliente as each other. With HD videos, weekly updates, a large archive, and bonus access to all 39 Reality Kings sites, 8th Street Latinas isn't just a Latin-themed hardcore site, it's the only Latin-themed hardcore site that really matters.

Overview:
Unless you're one of the four or five people who haven't turned on a television in the past year, you're probably aware of a little show called Modern Family and its breakout star, Sophia Vergara. The 39-year-old Colombian actress got her start in the US appearing in Tyler Perry movies then quickly rocketed to fame as the sassy, Spanglish-speaking Gloria Delgado-Pritchett on Modern Family, even winning a Primetime Emmy for her supporting role. Her success, it must be said, can be attributed not just to her comedic talents, but to her physicality. Hitting every note of most men's idea of the perfect Latin bride, Vergara has become a template for Latina starlets in every kind of media. Yes, even porn. 8th Street Latinas is a site on the Reality Kings network that presents women who might be a little less inherently appealing than someone of Vergara's stature, sure, but are nonetheless sizzling examples of why so many men dream of having a Mexican, Salvadoran, or Colombian lover at their beck and call. 8th Street Latinas promises to be a wild and ribald trip through South and Central American amateurville, with a gaggle of stupendously enticing women going to town on each other and any stiff dick in the vicinity because, well, because they're fiery Latinas, that's why! At $24.95 a month, your 8th Street Latinas membership grants you access to this exclusive collection of HD video and photo content, all of it hardcore, as well as to the esteemed Reality Kings network 8th Street Latinas calls home. Just call it Little TJ.

Now reaching staggering resolutions of 720p and 1080p, the videos of 8th Street Latinas present their hardcore pussy-pounding sex in High Definition formats that are thoroughly impressive. With ample detail in downloads and streams, and with multiple formats on hand for all kinds of viewing platforms, this site, like most Reality Kings sites, excels in the video department.

Although most of them are unknown performers and likely amateurs, the women appearing on 8th Street Latinas are a real treat. With tight bodies, handful-sized breasts, and those legendary Latin asses, your eyes are granted plenty of stunning sites. What's more, these women seem very sexually confident and make no bones about getting themselves off as well as treating their new fuck buddy to a great time.

8th Street Latinas updates once a week, on Fridays, adding another scene to its already very impressive 445-scene collection, every bit of which is exclusive and has been originally produced for this site and this site alone. As a bonus, all members, including those who join through Mr. Pink's and save $7 in the process, also receive free access to the entire Reality Kings network; all 39 sites, from Hot Bush to Mike in Brazil to First Time Auditions.

Cons:
The members area of 8th Street Latinas is packed not just with update previews and content lists, but also with advertising graphics and link banners leading to other sites and networks. Some remain unlabeled and can easily be mistaken for 8th Street Latinas (or at least Reality Kings) content, causing confusion and disorientation amongst the membership.

Of the 445 scenes currently online, only 125 are presented in High Definition video formats. The rest, I'm sorry to say, look progressively worse the further back into the archive you delve. Photo content also fails to make a strong impression and only reaches 900px on its best days. An upgrade to the photo section is an essential move all Reality Kings sites must soon make.

Conclusion:
When the only negative aspects to a particular website are those that are present on the network said site resides on, you know you've got a pretty good thing going; and when those negatives are ultimately forgetable or easily ignored, you're in an ever better situation. Such is the case with 8th Street Latinas. Housed on the Reality Kings network, this stupendously hot Latina hardcore site presents 445 scenes in which amateur Latin babes are picked up on the streets of their cities (and ours), taken somewhere a little more private, and pounded until they're nothing but quivering, sweaty, cum covered heaps of gorgeous flesh. The HD videos online at 8th Street present scenes beautifully and the performers, whether professional or amateur, give their all and create some extremely hot fuck scenes. Throw in bonus network access to all 39 Reality Kings sites and there's really very little worth complaining about here. 8th Street Latinas is pure gold, hombre. Pure. Gold.