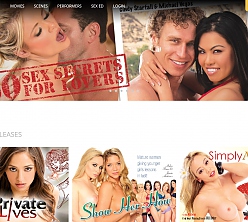 Overview:
Adam & Eve may never have existed (though that wouldn't be the fundamentalist Christian argument) or maybe their transgression against their supposed creator really did happen and put us on a path of eternal servitude and obedience. Whatever the case, the story stands: sex can complicate matters. Thank goodness there are entities like Adam & Eve, the long-running adult retailer and producer of fine erotic aids and implements, as well as award-winning hardcore entertainment. Adam & Eve's work can be seen on many sites, including a few of their own, but its Adam & Eve TV, effectively the online streaming cinema for fans of the studios acclaimed work. Boasting of High Definition video streams, a very active update schedule, ace directors and producers, and the finest talents both female and male that the porn world has to offer. And, considering that many Adam & Eve movies are parodies or comedies, or even westerns or neighborhood swinging dramas, the cast had better have their acting chops together or these titles could fall pretty damn flat pretty damn quickly. At $29.99, the standard monthly membership price, Adam & Eve TV is affordable without being a killer deal, but we here at Mr. Pink's have a way of sending some savings your way, so stick around for this in-depth look at Adam & Eve TV - who knows how things will turn out?

Cons:
Although Adam & Eve TV does offer a fair amount of exclusive content, most of the archive can be found both in physical form (DVDs, Blu-Rays etc) and on other video vending sites. There's also the company's video-on-demand site, on which you can pay only for what you want, which may be a better option for some.

Adam & Eve TV doesn't offer a single free download option to its subscribers. All videos are available for streaming only or paid download. Strangely, since A&E clearly wants to charge for downloads, all download purchase links I tried failed. I guess it's streaming-only at Adam & Eve TV.

When you've managed to narrow down your viewing selection - which can admittedly be a trying process on a site without many useful navigation tools like this - you're not taken to the usual porn-site viewing page, one with keyword tags, cast lists, upload dates, and synopses, but an overly simple page with nothing but the video present. Another missed opportunity, the lack of Roku accessibility, is another bummer.