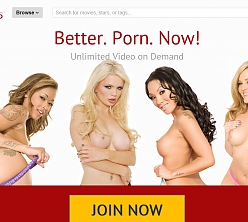 Videos stream via Adult Empire Unlimited's High Definition and Ultra-HD formats, with 1080p and 2160p resolution peaks respectively, and look clear, clean, and brilliant much of the time. Of course, with movies sourced from different studios, image quality varies.) Streams play quite smoothly and aren't limited to laptop viewing: mobile devices and Roku-equipped TVs can screen your Adult Empire Unlimited favorites, too.

Cons:
Everything found at Adult Empire, at least its Unlimited branch (the company also offers a VOD site), is available for streaming viewing only. No downloading is permitted whatsoever - even the usual crafty workarounds won't fly - leaving hoarders and archive-builders with no means of enjoying Adult Empire Unlimited's excellent licensed smut at a later date.

Conclusion:
There's a lot to love about Adult Empire Unlimited's Unlimited service: endless hours of HD viewing, top adult performers doing some very fine work for a variety of studios and producers, content hitting all mainstream genres and plenty of eclectic niches, too, and even 4K Ultra-HD videos exclusive to this very site. The lack of downloadable content will no doubt make many would-be members second guess signing up, even though streams are very impressive much of the time. The wide range of material on hand will please those with extensive interests but may clutter the site for more mainstream fans. Pornstar Empire and Gay Empire don't exactly make the best pair of bonuses either, at least not for straight subscribers. The most exciting smut online at Adult Empire Unlimited is its small but growing collection of exclusive 4K movies from Jay's POV, among other producers. It'd be cool to see the site offer a limited number of downloads each month to every member, but the download issue aside there's little to send you scurrying from Adult Empire Unlimited and its exhaustive and wide-ranging archive.