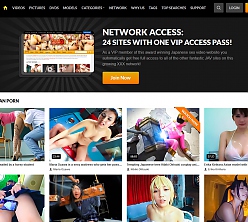 Devoted fans of JAV will note many top stars among the All Japanese Pass roster: Kouda Yuma, Mizuki An, Maria Ozawa, Asada Yuki, and Tatsumi Yui to name but some. Each woman can be selected and investigated via her profile page complete with comprehensive links to her All Japanese Pass scenes.

Much of the content found at All Japanese Pass is presented in 720p High Definition streams and downloads. The majority of the JAV online here, however, sits in SD frames. Photo galleries appear to peak just below 3000px and generally offer decent views, though some galleries are clearly nothing more than video screencaps.

Cons:
The vast majority of sex seen on All Japanese Pass pages is, I’m sorry to report, censored. Floating pixel clouds blur and otherwise obfuscate the penetration shots, leaving viewers demanding uncensored smut to seek another vendor. Clear labelling of censored and uncensored content would really be a plus here.

It can be quite unclear just how often All Japanese Pass actually adds new material. Checking each DVD title’s viewing page will reveal upload dates but they’re not immediately visible from the scene listing pages, nor do they always add up to a regular, frequent schedule of new scene uploads.

It’ll be obvious to most seasoned JAV fans that All Japanese Pass merely collects, catalogues, and redistributes J-porn created by established studios and companies. This content should not be considered truly exclusive, the DVDs available online and in physical form. Strangely, some scenes are added to the network archive more than once and can even appear next to each other on scene indexes.

Conclusion:
Largely censored and therefore not as graphic and explicit as most viewers would’ve hoped, All Japanese Pass drops a few slots with this revised Mr. Pink’s review. Still mostly stuck at 720p resolutions, the “High Definition” videos on offer are being clearly beaten by competitors when it comes to quality. Sources being what they are, a full 1080p upgrade could be out of the question, let alone a 4K UHD program. The sex itself is thankfully insanely hot, widely varied, and always lively. Making your way around the site is fairly breeze though it’d be great to be given more model information and clearer thumbnail previews. Unless its web crew happens on a treasure trove of 1080p or 4K content and starts pumping it into this already well stocked network, All Japanese Pass’s star could be fading far too soon for its devoted viewers.