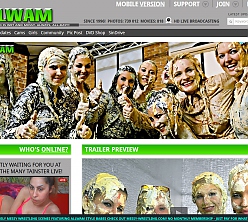 Discussing your wet-and-messy fetishism with a partner or date must be damn near impossible. "So, you wanna come over tonight and wallow in a bath of bolognese sauce?" is hardly likely to go down well, unless you're dating a woman worthy of appearing on All WAM, the Tainster network's proudest sploshing achievement. With kitchen-set food, drink, and oil fights galore, a ton of dancing beneath nightclub shower systems, and all kinds of fondling and fighting women enjoying the sensation of getting themselves and each other all (you guessed it) wet and messy! With 1080p HD videos capturing every morsel whether edible or feminine, All WAM is loads and loads of truly filthy fun.

Overview:
Watching American teen movies and school-set comedy shows as a youngster led me to believe I was attending the only school to have never experienced a chaotic food fight in its cafeteria. I swear I must've wished my little brains out that someone would one day just pick up some yogurt and fling it across the room, inspiring everyone to ditch propriety and mess some shit the fuck up! Today, as an adult, food fights take on a more cultivated style, one leaning heavily towards the sexy and the perverted. I'm talking about wet-and-messy fetishism (or WAM), porn where attractive women splash and sploosh and squelch through wading pools of jello, syrup, sauce, and other liquids, gels, and soft food stuffs of all kinds. All WAM is the Tainster network's signature WAM production - and it's a doozy! Tour pages preview scenes set in kitchens, bathrooms, living rooms, bedrooms, and on nightclub dancefloors, in restaurants, and in photo studios, scenes in which sexy European babes pour jugs of milk over each others' breasts, gargle cream both thickened and whipped, splosh around in wading pools filled with colorful gelatin, and punish each other with humiliating food assaults in public spaces. The women of All WAM and about as wet and wild as porn performers come, but be warned, they're generally not hardcore performers; in fact, many women appearing expose little more than a discreetly flashed nipple. For access to this exclusive wet-and-messy emporium you can expect to pay €19.99 (or about $22.55 USD) each month, but with so few quality WAM sites in operation, that might not be an expenditure you'd second guess for even a second, not when there's so much sexy sploshing fun to be had!

All kinds of women get into WAM play and All WAM hosts many perfectly sexy partiers from a host of European countries, Ashley Robins, Gabrielle Gucci, Valentina Ross, Victoria Puppy, Nathaly Cherie, Donne Joe, and Alyssia Loop among them. Needless to say, anyone who loves watching crazy-sexy Europeans in sexy situations should love the skintight and wetlook outfits and every minute of messiness All WAM hosts.

All WAM's videos can be viewed at 540p, 720p, and 1080p resolutions in both streaming and downloadable formats. Most videos capture the colorful and chaotic activities whether taking place on the shower-equipped dancefloor or the behind the bathroom door. Photo galleries offer a good still supplement with 1920px images offering similarly clear and vibrant views online or in downloaded zipped sets.

Cons:
Shower scenes taking place in loud nightclubs have made up a sizable chunk of All WAM's recent updates and, although they offer some strong ogling opportunities as babes gyrate against each other in wet, slicked clothing, there's not as much making out or serious fondling as in, say, a kitchen food-play scene. Nudity in the nightclub shower scenes is scarce.

Party and nightclub scenes don't usually identify the women they feature, nor do some of the other, more conventionally porny scenes. Even if only a first name, identifying these slippery teases and sluts would help fans find more of their content (even if it is only a few scenes per woman) or at least put a name to the face and body they'll be whacking it to.

While shower scenes carry almost no dialog aside from the occasional hoot or holler, interior scenes generally start with some conversation. Usually this conversation is in German or Czech or Russian. Without subtitles, there's little chance English-speakers will be able to understand what's being said.

Conclusion:
Definitely one of the leading wet-and-messy sites currently going, All WAM offers a large and exclusive collection of mostly HD scenes that stick very close to the most elemental components of a wet-and-messy scene: sexy women in tight clothes covering each other in foodstuffs, liquids of all kinds, and more gels, jellies, and jams than you knew existed. There's very little nudity, but that doesn't stop things from getting very sexy as the ladies rub against each other and against themselves, accentuating the effect the soft solids and liquids have on their often silk or satin clothing, making them cling even tighter. This is generally now rendered in 720p and 1080p HD video formats, streaming and downloadable, as well as in 1920px photo galleries (also available zipped) that present all the sloppy and chaotic action with a vibrant, colorful sheen. There does appear to be some kind of content recycling happening here though: recent updates have included some apparently five-to-eight-year-old movies. As long as this is a very temporary situation, I can only see All WAM getting better and it continues. It's already proven more outlandish than many other WAM sites, so if a few small improvements are made - English subtitles, no more unnamed performers, more occasional nudity etc - All WAM's superiority should remain uncontestable.