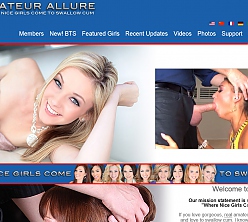 Reaching hyper-detailed 1080p resolutions at their best, Amateur Allure's videos hit you square in the face with some amazingly vibrant and lively POV-shot scenes. Photo galleries can, like the videos, be viewed online or downloaded to your desktop and reach 1000px either way. Although there's clearly room for a resolution hike, photos capture saliva drips, facial splatterings, and the succulent lips of models very nicely.

The Pre-Audition updates really only work for one reason: multiple new girls added in one single video. With less time for introductions, these fleeting appearances are sometimes the only Amateur Allure work the model shoots, never returning for a full episode of their own. Perhaps these scenes could be extended or expanded and instead delivered as full, regular scenes, not three-girl quickies.

The women of Amateur Allure are most certainly not amateurs, most of them not even slightly. Such known stars as Ava Taylor, Bailey Bae, Lexi Belle, Ashlyn Malloy, and Belle Knox all appear here and work their onscreen magic for your enjoyment. This site really just takes young pro performers and shoots them in a faux-amateur context; it's dishonest, sure, but it's also incredibly hot.