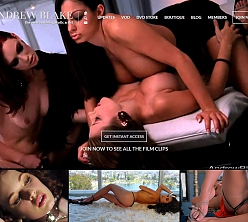 Heading towards his 800th scene, Andrew Blake and his crew keep adding more video material at the average rate of one scene every two days. All members enjoy access to some quality bonus content, too, including behind-the-scenes galleries documenting classic Andrew Blake photoshoots.

It's also no surprise then that Blake's work hasn't been made available in 1080p HD and likely wasn't shot at a resolution any higher than the current 720p peak viewing format. Photo galleries could also stand a resolution upgrade, lagging behind many competing sites and photographers already surpassing 5000px.

Neither video nor photo content can be easily downloaded. Actually, unless you count the obvious ability of users to save individual images, nothing can be downloaded at all. Galleries do not offer a zip option, leaving only online viewing photo-by-photo; videos are strictly streaming-only.

Navigation options aren't exactly abundant at Blake's online empire. Members are given only a few tools with which to browse, trawl, scrape, and otherwise enjoy the fruits of their purchase: a model roster and chronological video and photo update listings, that's basically it.