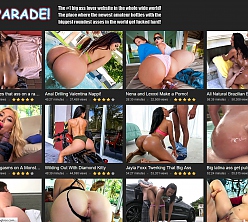 Overview:
Have you ever attended a fashion show complete with catwalk and gaunt, expression-less models? Or how about an adult beauty pageant, swimsuit competition, or denim jean modeling showcase? No? Well, those that have will tell you that it's a case at these events of reality not meeting your high expectations. A parade of pert female rear-ends presented for your viewing pleasure, these events are most certainly not. The Bang Bros website Ass Parade, on the other hand… Well, it's so loaded with bottom-heavy babes that any ass-man worth his salt has probably already spent a very fine few months at this legendary Bang Bros butt celebration. Those who've never had the pleasure of watching porn's thickest, meatiest, and most squeezable rear-ends bounce, twerk, gyrate, and grip those Bros' dicks like they're never letting go now have a more appealing Ass Parade to consider than ever before. High Definition videos now reach 1080p and showcase every rump and hump in all its glutinous glory in exclusive hardcore scenes that'll surely have any leg- or boob-men changing their designation and joining the booming legion of Ass Parade fans. What's $29.95-a-month when the world's foxiest female asses are shown here in all their irresistible glory?

Every Monday, a new scene full of incredibly bootylicious viewing lands at Ass Parade HQ, adding another episode to the marvelously deep nearly-600 scene archive. Dig back to the early updates and you'll find more amateurs than pros, though nowadays it's the total opposite. All-in-all, there's enough variety and depth here to keep you coming back again and again.

Scoring you, dear reader, a discount deal that'll now get you inside Ass Parade for just $14.95-a-month, Mr. Pink's definitely has you, ass-fans, in mind! Hard to resist at any price, a discounted Ass Parade suddenly becomes utterly unmissable, especially as it opens the entire Bang Bros network before you like the pornographic smorgasbord of your dreams.

Video file sizes remain quite large despite compression becoming tighter and smoother every year. Ass Parade members wanting 720p and 1080p HD movies will regularly find themselves needing to clear up some hard drive space for the 1.5-to-3 GB file they're to download. Although visuals are very strong here, the huge files can dissuade downloaders from their usual viewing habits, pushing them to streams instead.

Ass Parade isn't the only Bang Bros site entirely concerned with junk-filled female trunks. There's also PAWG (Phat Ass White Girl) that might not feature the Latinas, African Americans, and occasional Asians that Ass Parade does, but arguably does just as brilliant a job at worshipping porn's juiciest asses.