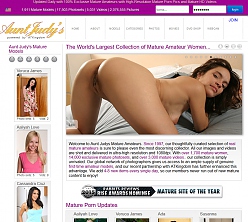 As the AT Kingdom's dedicated MILF-porn page, Aunt Judy's has a tremendous responsibility to showcase these aging beauties in the most flattering but realistic way possible. With 1080p HD videos, 3000px photographs, and more mature models than you can shake a hearing aid at, this is one site that will have convinced that age isn't just a number, it's a rating. The older they get, the more experience they accrue, and the harder your dick gets, all thanks to Aunt Judy's.

Although it claims to be all-amateur, Aunt Judy's is not. Pro performers Nikki Daniels, Cassandra Cruz, Delotta Brown, Bianca Breeze, and Rachel Love, among others, bring their ample experience and huge appetites for exhibitionism and sex both straight and lesbian to the site, as do hundreds of genuine amateurs you've likely never seen before. And, captured in 1080p HD videos and 3000px photo galleries, they look fine indeed.

Aunt Judy's 1080p HD videos look great, offering crisp visions of these aging beauties. It is disappointing to find no 720p-sized format online, especially as this is often the more manageable option and can allow for smoother local playback and faster download due to lower file size.

If you love mature babes but also fancy a few thousand other hotties of various ages, ethnic backgrounds, and levels of professional experience, you'll be ticked off to find that no ATK site, Aunt Judy's included, gives its members access to another other ATK site without additional payment being required. A taste of these sites is online here in the shape of bonus updates, but that's a far cry from network access.