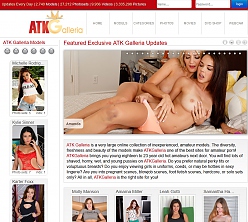 Just what lies behind the front door of ATK Galleria? Is it a shopping mall stocked with the hottest, foxiest women to join the ATK stable of late? Why, yes, it is! It's also home to some 10,000 videos and 28,000 photo galleries that aim to not only introduce you to your new favorite porn starlet, but have your libido roaring, your boner extending, and your eyes even getting a little misty over the thought that, tragedy, one day you and ATK Galleria may have to part. (Good thing membership is recurring, right?) ATK Galleria isn't the most unique of ATK's sites, nor is it the most explicit or adventurous, but if you ask ATK themselves, they'd likely tell you it's the best.

ATK Galleria's model roster pulls the best, brightest, and most babelicious models to this site. From curvaceous honeys like Armana Miller, Nina North, and April O'Neil to tiny-framed cuties Aaliyah Love, Piper Perri, Abby Rain, Shane Blair, Taylor Reed, and Alice March. Each woman is featured on her own profile page, most of them sharing some biographical info and answering a basic Q&A for good measure.

Ready for viewing in 1080p streams and downloads, ATK Galleria's videos offer crisp images viewed online or offline, as do the photo galleries. At 3000px peaks but offering multiple viewing resolutions to suit your needs whatever they may be, ATK Galleria's photos are heavy on detail while feeling quite light, cheery, and casual. Like the videos, galleries can be viewed online or downloaded (in zips).

Everyone loves a bargain and, now priced at $19.95-a-month, ATK Galleria most certainly is that. Oh, you need more convincing? Did I mention that new content hits the site many times daily, bringing between five-and-ten photo galleries, and two-to-eight videos in alternating daily doses. That's in addition to the 10,000-plus scenes and more than 28,000 galleries already here!

Cons:
The very nature of ATK Galleria renders it nonexclusive. Pulling the best content from ATK's other sites for spotlighting on this one, there's nothing to be found at ATK Galleria that isn't found on ATK Petites, ATK Exotics, or another ATK venture. I realize that's the very purpose of ATK Galleria, but that doesn't make it exclusive or essential.

Going back, as it does, a number of years and featuring, as it does, a variety of photographers, it makes sense that ATK Galleria's content would range in quality technically, photographically, and artistically, but the range seen here goes from awesome to abominable, with some models clearly making deals with the devil to even be featured here.