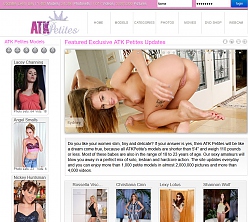 Overview:
Short guys love 'em 'cause they make them feel like big, hulking macho men. Big guys love 'em 'cause they amplify that already strong sense of masculine physical superiority. Porn viewers love 'em 'cause they're usually lesser known porn performers who haven't been dragged through the ups and downs of the adult industry to become jaded sperm receptacles. They're petites, my friends, and there's an ATK site all about them and nothing else! Promising on its tour pages a world of small-framed sluts strutting their stuff in High Definition videos and high-res photo galleries on one of the longest-standing petites-only sites the 'net has ever seen, ATK Petites sees the likes of Dolly Little, Taylor Reed, Angel Smalls, and Cindy Starfall presenting their tiny figures for your viewing pleasure. And they're not limiting themselves to softcore, either: ATK Petites has plenty of explicit sex to share, both hetero and lesbian! Membership will run you $29.95-a-month, but with a guarantee that all its content is 100% exclusive, ATK Petites could very well convince you to part with thirty bucks on the reg, devoting yourself to this small-girl showcase site like you've never done before. Such, dear reader, is the incredible allure of ATK Petites young, tiny marvels.

Pros:
ATK Petites isn't restricted to softcore modeling, throwing in plenty of solo, girl-girl, and hetero hardcore too. Softcore content often centers around bathing, trying on clothes or costumes, cigarette smoking (which, started early enough, stunts growth), and urination or piss-play. Featured models range from curvaceous to flat-chested and athletic, but they all have one thing in common: big girls they ain't!

ATK is known for being a very active group of sites. ATK Petites keeps up this reputation with a schedule seeing between three and five galleries added every day of the week. Videos also arrive frequently, every other day, and bring with them 1080p streams and MP4 downloads while photo galleries peak at 3000px online and in zips.

The steady update schedule only makes this large site even more appetizing than it was already with 7,600 videos and nearly 26,000 galleries available. That's a huge serving of tiny-girl softcore and hardcore for your dollar. And, with Mr. Pink now offering a discount that'll get you inside ATK Petites for just $19.95-a-month, you'd be mad to pass this by.

Cons:
Stuck with the same basic design for years, ATK Petites is, like most ATK sites, woefully unattractive. If not for the preview thumbnails and obnoxious, overbearing banner ads, the site would be totally free of graphics. This is hardly a welcoming and libido-igniting site to browse.

If you dig smaller-framed women, just not exclusively, you might tired of ATK Petites' all-petite model roster. If network access to other ATK sites, even just one or two, were available, this wouldn't be an issue and you'd be free to roam the company's archives to find whatever suits your current pole-stroking purposes.

While the provided 1080p HD video streams and downloadable MP4s look great and beautifully capture the diminutive models, the absence of a 720p video is a little annoying. After all, 1080p can be overkill for many viewers with 720p being the perfect compromise of quality and efficiency.

Conclusion:
ATK Petites is the company's dedicated showcase of physically small adult models and, as far as a modeling showcase goes, it's a damn fine site. Not only are its models very sexy and well accustomed to seducing viewers via a camera lens, the imagery is of a high standard reaching 1080p HD streaming and MP4 video resolutions and 3000px in photo galleries, where you'll also find multiple resolutions online and in zipped sets. The content itself can be a bit dull at times - how often do you want to watch a skinny babe urinate into an empty bathtub? - but there's enough variety of both women and content to keep most porn lovers well entertained for a few months at least. After all, this is a very large site with more than 25,000 galleries online and at least three more arriving daily. If that ain't going to be enough to keep your eyes firmly trained on ATK Petites, what on Earth will?