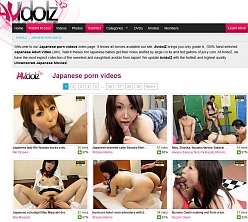 You won't find your favorite Asian pop starlets at AV Idolz (and not just because their Svengali-esque management companies won't allow it), a site instead loaded with adult performers all hailing from the Land of the Rising Sun. Boasting uncensored HD videos and English subtitles, AV Idolz seems more promising than most JAV endeavors, but do such features exist and, if so, will they be enough to keep all you JAV lovers coming back to AV Idolz for a taste of Japan's most desired delicacies?

Pros:
The titular naked beauties of AV Idolz include some of Japan's most notable adult performers, women like the ridiculously sexy Maria Ozawa, Rin Yazawa, Shizuku Mori, Haruna Sakurai, and Nozomi Onuki all make appearances here and in High Definition video, no less! Filling 1080p frames, AV Idolz HD content (what there is of it, anyway) looks very clear, clean and vibrant. Oh, and the best part of all…?

Speaking of the archive, AV Idolz currently holds on its servers a total of 405 DVDs which in turn deliver 624 scenes. New content is added frequently, too, at a rate of once scene every two-or-three days. AV Idolz is also connected to a large network also filled with (mostly) uncensored Asian hardcore on such sites as My Cute Asian and Teen Thais. Network access is, of course, provided at no extra cost to you.

Cons:
Although no promises were made stating as such, AV Idolz does not hold exclusive content or, if it does, it only holds a very small amount. Many of these movies saw retail DVD releases while others were well distributed online both in Japan and elsewhere. There are some less obvious, almost rare movies here but there's also the ubiquitous Tora Tora Gold series seen by every JAV fan on Earth.

Photo galleries, like the videos, don't often reach HD or high-res sizes, instead sitting at 1020px and thereabouts. An upgrade to the 3000px arena would be awesome to see, especially since this site boasts such an impressive uncensored photo archive, but that upgrade seems dismally far off at this point.

Conclusion:
AV Idolz two most promising features, English subtitles and uncensored HD videos, aren't in strong enough supply to really make this site unmissable. They are, however, enough to push AV Idolz above many other JAV vendors. With around half the archive translated into English and a complete absence of censorship pixilation, there's at least two great reasons to join the ranks of members. High Definition videos aren't as compelling, being that there's only 16 of them available at the moment, but that could (and hopefully will) change in the coming months. From 405 DVD releases AV Idolz has pulled 624 scenes of hardcore depravity and scorching hot sex, as varied as you'd expect from any self-respecting JAV vendor but not as exclusive as some would-be members might have hoped. With network access to another six Asian hardcore sites provided free of charge to all paying members, AV Idolz might fall short in some areas, but generally makes up for this slack with a bevy of awesomely uncensored hardcore JAV that's sure to please.