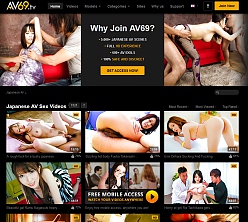 From the fiendish minds that brought you, of, every other kick-ass site on the uncensored JAV HD Network comes an adult site focusing entirely on the most beautiful, charming, and provocative women JAV HD hosts. AV69 doesn't limit itself to one body type or personality, just an attitude and a certain level of plain old good looks, finding super-slutty ultra-babes and sexy girl next door types trying something new and daring. Delivering HD videos as rich as the model roster itself, AV69 is the classiest and most seductive of the many JAV HD networks, and it's one of the best.

Pros:
The almost unfathomably sexy women of AV69 come in all kinds of physical packages with one consistent feature: something totally irresistible and often elusive. From statuesque, long-legged lingerie fetishists to stocky, round-faced girls in maids outfits to tanned teenage Harajuku girls lathered in oil and creaming all over a stiff cock, the likes of Mei Haruka, Rina Koda, Yui Hatano, and Ameri Ichinose really impress here.

Delivered largely in 720p and 1080p MP4 videos that can be streamed or downloaded as you like and look pretty damn good either way. Photo galleries are also online, though they usually look more like video screencaps than digital photographs. AV69 promised uncensored content and I'm thrilled to confirm that you won't find any pixel clouds marring your vision of graphic Japanese sex, not on JAV HD's watch!

JAV HD Network doesn't just host AV69, it welcomes all its members to roam the other 15 websites as they wish, picking and choosing from thousands of excellent and, yes, uncensored J-porn. Mr. Pink's can't just whisk you inside for free, but we can sneak you in for the heavily discounted monthly price of $19.99 and that's nothing to sneeze at.

Cons:
JAV HD Network is mightily impressive, but it's not perfect. Some AV69 content may be found reposted on other network sites with only slight differences, if any at all. This isn't a huge problem and the dupe content is by no means overwhelmingly obvious, but it's still not a great habit to see in place.

Similarly, the HD videos on offer aren't always what they seem or what you expect. Most listed as HD do hit HD resolutions but there's little rhyme or reason to whether that'll mean a 720p or 1080p frame. Older content can fail to reach HD resolutions entirely and some videos are interlaced, giving some picture distortion.

Conclusion:
AV69's Idol emporium delivers a wide range of excellent J-porn that celebrates the lusty physicalities of its models. There's not a whole lot to say about the content itself, it being a strong mix of styles nearing and in the mainstream, isn't limited to longing body shots, and is usually (but not always) shot with quiet control and skill. High Definition video links don't always provide exactly the format or resolution you'd expect, but more often than not there's a 1080p HD sexual epic on the other end. Disappointingly, the photo galleries tend to hold screencaps, not photos, but they're still worth checking out if it's quality stills you're after. Size-wise, AV69 is doing very well with more than 1000 scenes online and more arriving on what tends to be a frequent though not exactly regular schedule. A crucial part of the JAV Network to which all its members are given a free pass, AV69 is an excellent showcase of what makes Japanese Idols some of the most adored models in any industry.