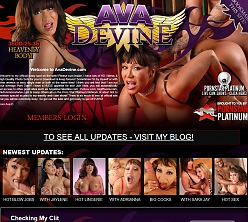 Ava's site offers up videos and photos in high resolutions, the former reaching a peak of 1280x720 pixels, the latter reaching 1600px. Videos can be streamed or downloaded while photos can be viewed in online galleries or snatched in zipped packs, allowing hoarder to stockpile all their favorite shots of Ava in action and repose.

Cons:
As just noted, updates are still arriving here, but they're only appearing at a rough rate of two-per-month. This isn't the most reassuring schedule and could put off those who demand consistent, reliable weekly updates from the sites they choose to subscribe to. Ava's archive isn't huge and some might be put off by there being only 67 videos and 91 galleries online.