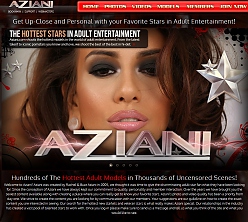 Overview:
Back in the late-90s, it seemed every woman with giant tits and few inhibitions leapt at the chance to start their own online porno empire. Of those women, very few lasted more than a year. And of those that did last, almost nobody has flourished like Rachel Aziani. Initially a heavy-chested model with little to offer but her bodacious body and her boundless sexual enthusiasm, Rachel went on to become one of the most successful porno entrepreneurs of the late-90s. Now that the dot-com boom has burst and once promising porn-trepreneurs have vanished into the normal, everyday world, Rachel remains one of the last standing self-made legends of the era. On her Aziani website, Rachel welcomes porn's most glamourous strippers and sluts for an all-out adult entertainment extravaganza that leaves the guys at home for solo female shoots laden with stripteases and self-pleasure. Charging $24.95-a-month for access, Aziani guarantees its members totally exclusive content rendered in High Definition video formats and high-res photo frames that'll have your jaw dropping, drool pooling in the corner of your mouth, and a very noticeable growth happening in your trousers. Under Rachel Aziani's guidance, the teens and MILFs featured in Aziani episodes are about to set your libido on fire.

Pros:
Aziani is all about women. The more buxom, beautiful, and sexually excitable they are, the more likely you'll find them showing off in an Aziani scene or gallery. Mature hotties like Ariella Ferrara, Devon Michaels, Brandi Love, and Farrah Dahl join younger (but no less vital) performers like Anissa Kate, Carmen Caliente, Kendall Karson, and Janice Griffith.

At its best, Aziani delivers videos in dazzling High Definition formats, and photos in high-res galleries loaded with detail. Both videos and photos can be viewed online or downloaded for local use. Loaded with detail, the 1080p HD videos prove more watchable than the 1920px photos, though gallery fans will still find much to appreciate there.

Cons:
Updates have seriously slowed down here at Aziani. Current members are given only two new galleries and scenes each month with roughly two weeks passing between updates. This unfortunately leaves Aziani's future in some doubt: will updates pick up and return the site to its former glory or will they continue as they are until eventually petering out?

Burdened with a layout and design that hasn't been revamped and updated, this site could definitely use a revised design, a more detailed and intuitive navigation system, and, well, a big of an overall polish.