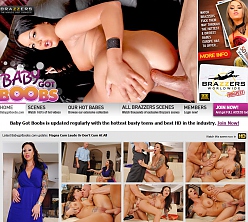 Although they're coming along frequently enough and are very nearly dropping new scenes on a weekly schedule, Baby Got Boobs does slip from time-to-time, missing the regular weekly date by a day or two. This likely won't amount to much more than a slight annoyance for some members, but it's worth noting all the same.