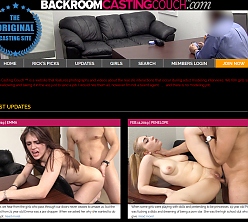 Overview:
If there’s one thing that inflated pus bag, Harvey Weinstein, helped us understand about Hollywood it that’s the infamous casting couch of legend is, as once believed, stained with the semen of a thousand pathetic sexual “conquests” and the dreams of a thousand hopeful stargazers. Backroom Casting Couch isn’t promising dreams of Hollywood superstardom but it is shooting audition tapes that push things a little further than most. Online since ’08’, Backroom Casting Couch (or BRCC as its sometimes called) makes audition appointments with all kinds of genuinely amateur women, sometimes letting them know what lies ahead while on other occasions letting the sex comes as something of a surprise. Shot in rich HD video from some bare-bones office tucked away in an OC industrial park, these are the hardcore amateur tryouts we don’t see make it to TMZ or a tabloid rag. Sitting exclusively on a shoddy brown sofa that has seen many, many female rears, the young starlets are shown what Hollywood is really all about while you, the home viewer, enjoys all the coercion and carnality you can handle for a mere $24.95-a-month, only at Backroom Casting Couch.

Backroom Casting Couch used to be a standalone effort and one that you’d need a little convincing to join. Now with the addition of an awesome amateur-focused bonus network including acclaimed sites Exploited College Girls and Black Ambush, this is a dynamite deal whichever of these sites initially lures you in.

Dig back into the early days of Backroom Casting Couch and you’ll see a ton of scenes that, quality wise, now fail even the most forgiving technical tests. Sure, it’s unlikely that you’ll spend most of your BRCC browsing time on pages 105 to 110, but if you do, prepare yourself from some seriously dated smut.