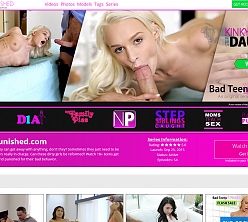 Bad Teens Punished is a fantastic showcase for porn’s brightest young acting talents. Obviously you’ll encounter some off-key line readings or robotic staging but, for the most part, these cinematic encounters throw story and character at the performers, who run with it until the pants come off and the pink bits start smashing. Keep an keen eye on Blair Williams, Dolly Leigh, Tara Ashley, and Alex Blake, all excellent performers.

Hitting 720p and 1080p resolutions both in streams and downloads, the latter in MP4 format, Bad Teens Punished brings its very well shot content to your screen, whatever size, in crisp detail with a strong atmosphere of seduction and barely concealed lust depicted very well. Photo galleries are also landed with great visuals, including plenty of powerful close-ups of the wide-eyed young women in full-on, “Daddy, I’ve been baaaad…” mode.

Cons:
Home to just 54 scenes at present, Bad Teens Punished is certainly one of Nubiles’ more modestly packed sites. An erratic update schedule brings new scenes about once-a-month, a drop from the earlier twice-monthly schedule. Bad Teens Punished may be tons of fun, but there’s plenty of room for growth.

Conclusion:
If Bad Teens Punished was one of its star performers, someone like Alex Blake or Tiffany Watson, you can be your bottom dollar they’d deserve a spanking! Failing to deliver a satisfying update schedule, holding only 54 scenes, and launching without the much desired 4K Ultra-HD program many of its competing porn peddlers are now reaping the benefits of installing, Bad Teens Punished does seem a little behind where it could or should be. That said, the vivid detail and lusty atmosphere of the visuals, and the story and characters propelling the scenes towards kinky, heavy-handed discipline and sex, it’s a damn fun and fucking arousing addition to the Nubiles stable. Spread yourself around the network, freely accessible to all members, and enjoy what else Nubiles has to offer then return to Bad Teens Punished every now and then for a reminder of what brought you here in the first place: sexual power plays fit for a very bad daddy!