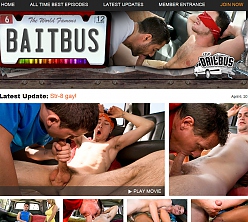 The saying goes "Give a guy a bus ticket and he'll get where he's going; give a guy a bus and, assuming he's both gay and sexually perverse, with a fondness for straight guys, he'll turn it into the Bait Bus." Ok, so I made up that particular pearl of wisdom, but Bait Bus is very much a real thing and you can vicariously ride it with the owners and (usually) Alexis Fawx. What's a women doing on a homosexual hardcore site, you ask? Why, she's there to lure in the straighties, seduce them pantsless, and do anything she can to convince these blindfolded pussy-fiends that it's her finely formed mouth wrapped around their throbbing member, not that of an anonymous and previously hidden man. If anyone told me I'd be fucking Alexis Fawx then substituted her for some guy, I'd be as livid as Bait Bus's hetero riders tend to be when they find out they just spunked on the face of someone named "Bud" and not a busty, lusty, better make that super-busty pornstar babe. Boom, chud, you got sperma-served!

Overview:
Come one, come all, and board the Bait Bus for a trip through a hardcore homo-centric neighborhood that takes "straight" guys and shows them the milky white light at the end of the bell-ended shaft, all the while keeping them well and truly in motion, still heading to their original destination. Now, this might all sound quite confusing, but one look at Bait Bus's tour page will answer most of your questions, but it'll also raise some new ones. One of the few female pornstars accepting enough to fuck trannies and work in otherwise all-male gay porn, Alexis Fawx graces Bait Bus with her presence and acts as the bait with which unsuspecting straight men are lured aboard a bus much like the infamous Bang Bus, convinced they're about to stick their meatsticks inside the one and only Alexis Fawx, blindfolded, then promptly chomped on by a guy whose taste for semen rivals only Alexis'... and maybe yours! For $24.95 a month, you too can ride the Bait Bus and enjoy a near endless supply of soon-to-be-cock-munching men rendered in High Definition videos, high-res photos, and the nuttiest nut-busting since chestnuts were roasted on that very first open fire. Oh straighties - folks, just wait 'til you see their faces when they find out they've just blasted on the tongue of *gasp* a dude, dude!

Pros:
What a neat concept! Combining humorous pranks and anonymous hardcore sex in a highly original fashion, Bait Bus is adept at turning straight guys into butt-fuckers and staunchly hetero dudes into the gayest fatherfuckers on the 'net. It's always nice to have a bit of a chuckle as you try to remember where you left your little pocket-sized Kleenex pack and Bait Bus definitely makes this possible.

Alexis Fawx is one hot woman, but that probably doesn't interest you, right, dear reader? In case you fancy both men and women, let me assure you that any time spent enjoying the physical presence and laugh-a-minute hilarity that comes with watching Ms. Fawx convince ignorant pre-homos that they're about to invade her personal space in the most intimate a fashions.

The vast majority of Bait Bus scenes are presented in video formats that reach very attractive resolutions of 1280x720 pixels, play smoothly, and deliver all the action (which can get pretty damn busy) very nicely indeed. Videos can be downloaded or streamed and you're now pretty much guaranteed to find any viewing option looking supremely swanky.

Bait Bus doesn't skimp on the content, already holding nearly 100 scenes, each of them original productions available here exclusively, and adding another one every single week until you've had your fill, whenever that might be.

Cons:
Although Bait Bus is closely linked to both Big Daddy and Bang Bros networks, neither have opened their roster of websites to Bait Bus members, leaving them somewhat in the lurch. Damn, and Big Daddy's websites would've been a stupendously thrilling bonus, too!

The "straight" guys picked up by Alexis and the fellas certainly don't play it too hetero, if you know what I mean. Sure, they kick up a stink once tey find out they're banging not Ms. Fawx but some random hard-dicked dude, but they soon turn into ravenous cock-gobblers and show few reservations about getting all gayed up.

Speaking of Alexis Fawx, those who, much like this reviewer, find her to be an indispensable part of Bait Bus will be sorely disappointed to find that although she's in the majority of scenes, there are a bunch that either have a substitute broad who can't eclipse Alexis' star power or, on occasion, no broad at all.

As unsurprising as this may seem when you you consider Bait Bus is shot on the road seemingly with a one-camera setup, photo fans aren't going to appreciate the complete absence of photo content on the site. Screencaps are one thing, but photos are undoubtedly much more thrilling and fulfilling so it's sad not to see them included in these fun road romps.

Conclusion:
With such an intriguing premise, I'm quite surprised that Bait Bus hasn't made the rounds on the porn-related blogosphere of late. Since opening its doors back in 2002, Bait Bus has produced and delivered 85 exclusive scenes to its members. Arriving every week and now offering 720p HD videos as the prime viewing format, Bait Bus continues to impress its growing member base. There are, however, a few fairly minor faults with this highly original site. Photo content appears to have been completely neglected to allow the crew to concentrate entirely on their video productions, which is sure to annoy photo users. Although she definitely appears in the majority of recent scenes, the inimitable Alexis Fawx is noticeably absent from some scenes and there's an undeniable drop-off in entertainment value when she's not around to tease and taunt the bait. Speaking of the "straight" guys being turned here into smokers of premium pole, they're clearly homosexual (or at least gay-for-pay) professionals and their acting, while admirable in contrast to their other professional skills, doesn't quite scream out "I LOVE PUSSY!" the way the makers of this site intend it to. Those things aside, though, Bait Bus is still one of the rompin', stompin', penis-chomin' best times on eight (or is it six?) wheels and anyone looking for an even nuttier, all-gay equivalent to Bang Bus need not look far. Bait Bus is right around the corner and ready for new passengers.