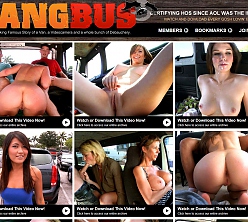 When a conspicuous white van turns the corner of your street and rolls down a window for someone to call out "Hey, bro! Got a second?" you'd better stop and ask yourself two questions: 1) Am I in the greater Miami area; and 2) Can I show my dick on the Internet? If the answer to both is a resounding "Yes!" then you might land yourself on the infamous Bang Bus. A mobile den of debauchery that's now as famous as the Internet is indispensable. Here at Bang Bus you'll see everyday chicks jump at a shot at some cash, disrobe, and start sucking and fucking for that good ol' green stuff, all the while cruising around town in the filthiest van to ever see so much hot damn action, the Bang Bus!

Along with Bang Bus's own archive of hardcore vehicular schtupping, all members receive free access to all 47 other Bang Bros sites courtesy of the included free network access. What's more, you can now join the ranks of Bang Bros members for a measly $14.95-a-month!

Cons:
Unlike most other Bang Bros websites, Bang Bus is shot entirely on the fly under situations that, at best, are tricky to control. It makes sense, then, that the producers would forego still photos and simply toss a screencap gallery online. It makes sense, sure, but it still sucks.

Bang Bus has always mixed amateurs and professionals, and has often shot soon-to-be-pros in their first (and still amateur) scenes. While some viewers will be thrilled to see the likes of Vicki Chase, Lisa Ann, Rose Monroe, and Courtney Cummz boarding the bus ready to fuck however many guys they can find, others will miss the more amateur-heavy updates of old.

There's far too much advertising littering the Bang Bus site and the entire Bang Bros network. Some of these ads are essentially content links to material you, the Bang Bus and Bang Bros member, won't be able to view without upgrading your network access to a whole 'nother level.

Some dope decided the women of Bang Bus weren't attractive enough as-is and set about artificially amplifying their curves, slimming their waists, and boosting their busts with some help from Adobe Photoshop. Inside the members area, the girls look much more natural; Charley Chase, bless her, even looks human again!