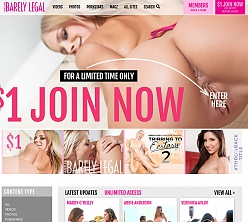 Not all, but many Barely Legal updates now carry with them both 1500px photos and 1080p HD videos. Other updates' videos fall to 720p, 540p, and 480p depending on the production date, but generally the visual quality is definitely watchable. Both photos and videos are available online or via downloadable zip packs and MP4 files.

Nineteen "bonus sites" are provided with all Barely Legal memberships - which can now be enjoyed for just $19.95 for your first month - and make it easier to find niche-specific content. The entire archive available to Barely Legal subscribers is a huge one, holding more than 4,400 videos and 2,200 image galleries. Throw in almost 100 digitized issues of the Barely Legal mag and that's a damn fine haul indeed!

Cons:
Videos often reach HD resolutions here at Barely Legal, but not always and, really, not often enough. The majority of videos I downloaded while examining Barely Legal were 540p and looked a little dull, drained of some color. There are some 1080p scenes online but they're hardly the majority or even the focus of future video efforts. It's hard to tell what's going on with Barely Legal's HD program.

Browsing Barely Legal should keep you away from MILFs, matures, or anyone otherwise over, say, 25-years-of-age. As all members essentially can access Hustler and Barely Legal evenly and from only slightly different angles, the two sites' archives blend together. You'll see Hustler models at Barely Legal and vice versa.

The Hustler house style hinders Barely Legal's visual success, often presenting scenes in drab locations under unnaturally flat lighting or barely bothering to dress up a set in a believable fashion. This shooting style still seems largely centered on still images, not videos, and that may rub you and your aesthetic sensibilities the wrong way.

Really, a Barely Legal membership is much the same as a Hustler membership. Both provide access to each others' archives, leaving out very little, if any, items. Navigation tools are basically the same on both sites and lead you in the same direction. It's clearly great to have access to both, but a little more variety and unique style to each would make it even better.