Home · Beauty and the Senior 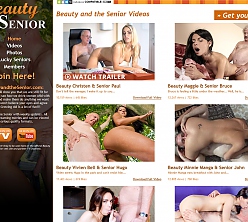 Beauty and the Senior review

The men of Beauty and the Senior prove that age is little more than a number by seducing and fucking women half their age - and younger! The Euro-shot hardcore featured here brings together 20-something babes and men well into their fifties (and beyond) for generation-gap-defying sex that's well worth investigating if you're a fan of this kind of coupling.

Overview:
Love knows no boundaries, not race, religion, socio-economic strata, musical preference, nor age. It's that last one, though, that remains a sticking point for many people even with Christians marrying Muslims, Africans marrying Taiwanese, and Ramones fans settling down with Garth Brooks enthusiasts. Pair a 40-year-old woman with a 19-year-old, though, and they'll get funny looks. Pair a virginal 18-year-old girl with a man pushing sixty, on the other hand, and someone might call the POPO! Beauty and the Senior offers age-disparity fans the chance to ogle in awe as aging lotharios prove both their virility and their appeal to younger women by, well, fucking them senseless. Incorporating daddy play, office and workplace fantasies, and all kinds of physical and sexual feats that, for most old-timers, are well and truly behind them. Beauty and the Senior promises its customers access to an exclusive archive of HD streaming and downloadable videos, zipped high-res photo galleries, and a wealth of bonus smut should these controversial couplings not prove exciting enough. All that is asked of you in return is €27.95-a-month (about $31.60 USD) and you'll be given unrestricted access to this apparent haven for socially forbidden generation-bridging sex between crusty old gents with heavy bellies and sagging balls and the lusty young harlots who adore them.

Beauty and the Senior isn't just home to recently produced HD hookups, but also scenes that appear to have been shot seven-or-more years ago. These SD videos would usually bring down the overall quality of the site, but they instead offer an aged atmosphere that works well in this niche - imagine where the couples might be today! The newer HD videos do look great in 1080p HD formats, though, it must be said.

Exclusive updates arrive here every two weeks and add to the existing total collection of 192 scenes (of which all but 37 are exclusive) and their accompanying photo galleries. And, now available for 50% less than normal thanks to an offer from Beauty's team and Mr. Pink's, Beauty and the Senior proves very affordable.

Surprisingly, there's no model roster or index here at Beauty and the Senior; not for the beauties nor the seniors. Considering age is such a vital component of the chemistry felt in these sexual encounters, you'd think the ages of the participants would be available somewhere inside the members area. Nope, they're not, and there's a handful of other navigational upgrades that could easily be used to improve the site.

Although there's a good-sized archive on the make here, Beauty and the Senior could definitely stand to increase its update schedule to the promised weekly one, not the fortnightly one now in operation. At this rate, it'll take far too long for the site to add its 250th scene.

Conclusion:
Beauty and the Senior serves a niche not often indulged to this level and overall it serves it quite well. It would be great to see, however, less prominent placing of bonus material - stick it on its own page instead of amongst actual updates - and the promised weekly update schedule. Older content shot before the HD revolution looks somewhat drab, but it also offers a different view of this age-old scenario, giving scenes a vintage look that fits well with this niche. The sex occurring here is generally quite steamy but fairly slow in pace - hey, some of these guys are pushing seventy - but still sizzles in 1080p HD video frames, streaming and downloadable, and in photo galleries holding 1980px images. Beauty and the Senior should charm the pants off (or at least open) of those into older men, younger women scenarios, but everyone else will no doubt find it a bit on the dull side. That's aging for ya!