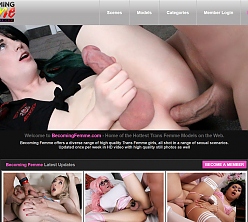 Booming Femme doesn’t actually deliver the weekly updates it promised; it goes one further and brings you something new every six days! Each update brings both photos and videos in strong visual packages. High Definition videos stream and download in 720p and 1080p formats while photos appear online in 1600px frames.

Cons:
Categories don’t reflect the variety of transsexuality on display here. Sissies, trans women with and without breasts or feminized features, cross dressers and more all get a bit lost among the general “trans femme” banner as the Categories menu focuses on sex acts and other physical traits like hair color and race.

Although it holds quite a bit of femme-fucking entertainment, Becoming Femme is hardly huge. The more eager viewers may find it lacking in some crucial areas, significantly whatever kinky slant on trans-porn gets you off. No bonus content or website access is provided, not even to Christian XXX’s other trans outlets.