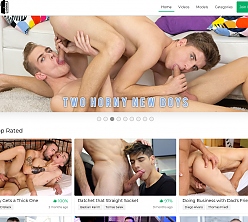 How close are you with your friends? If you’re anything like the young (and not so young) men of Behind Friends, a new and sordid collection of all-male entertainment, you share orifices and bodily fluids with glee. Ok, so maybe these guys are a little apprehensive at first, but inside Behind Friends lays a hot load of gay hardcore from the Czech Republic and, best of all, it’s delivered in glorious 4K.

Overview:
You’ve heard of keeping things “between friends,” but in some circles that means a lot more than just not spreading gossip or announcing a pregnancy. There’s a hot new all-male hardcore exploration of suburban homosexual activity in town, fellas, and it gets Czech boys and Euro bros both straight and gay give up their mouths and asses to each other in deliriously fun cock rocking videos. Behind Friends, offering exclusive Euro homo hardcore, hosts 4K Ultra-HD encounters that often begin as everyday yoga classes or Halloween parties but soon devolve into total gay debauchery as the cocks come out and every last guy gets to work proving his worth. A sexy cast of guys both newbie and more experienced give Behind Friends members great views of their bodies, whether hunky or twinky or somewhere in between, whether they’re topping or bottoming of switching it up at their or their partner’s discretion. Although new to the scene, Behind Friends nevertheless looks set to charm the fucking pants off a whole lot of you, and in glorious, gorgeous 4K, too!

Pros:
Behind Friends brings you a range of concepts and scenarios, from hardcore casting sessions to neighborly chats turned mutual butt fucking sessions. Twinks are introduced to the world of older men and their copious experience, learning how to give and receive from their studly, grey-stubbled daddies. It’s not all age-play, though, as more even pairings also grace the screen in steamy encounters.

Hitting the Models page brings up a customizable listing of every guy giving and taking dick on Behind Friends. From slim teen tryouts to party boys sucking a whole room full of dicks still half-dressed in their Halloween costume, guys like Gregor d’Arc, Jace Reed, Jasper Lee, and JD Black will soon be earning many new fans.

Updating every two weeks, Behind Friends may not be the most active site on the ‘net, but it’s moving ahead steadily and should have a more substantial archive soon. If you’re more concerned with quality and not quantity, the 58 scenes now online may fulfill your needs. Memberships can now be bought for just $14.95-a-month, which saves quite a lot but likely won’t last long.

Cons:
Home to only 58 scenes, Behind Friends isn’t exactly huge. Updates are arriving, just not as frequently as most folks would probably want. Two scenes land here each month, a schedule that certainly could be increased. With no network or bonus site access on hand, some folks may want to wait for Behind Friends to grow larger.

It’s not just the site design that lacks personality. Behind Friends just plays a bit dull, I’m sorry to say. The concepts aren’t all that interesting, nor is there a parade of super sexy guys. The models are attractive, sure, but hardly the uber studs we see on many other gay sites.

Conclusion:
Behind Friends hasn’t been around all that long so it’s not terribly surprising that it still holds fewer than 60 scenes. Then again, it’s not exactly fresh-off-the-server so a little more in the archive might help convince those would-be members still on the fence to throw their proverbial dipstick into this flammable fuel tank of admittedly quite attractive gay hardcore. Helping things look as good and tasty as they possibly can, Behind Friends features 4K video content as rich and vibrant as you could really expect. A vast improvement over what this undervalued niche and nation (the Czech Republic) used to give us fifteen, twenty years ago, these Ultra-HD videos offer awesome realism. Unfortunately, they’re not the most sexually inventive gay scenes around, nor are they so densely populated with absolute jaw-droppers for cast members that you simply can’t resist. If you like your homo hardcore to be of the twinkly Euro variety (but not strictly limited to it), Behind Friends just might be the beat-off buddy you’ve been looking for.