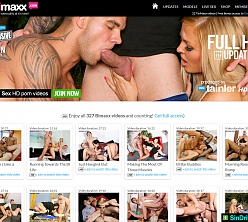 Maximum sexuality and maximum possibility is what BiMaxx is all about. To put it more simply: men and women fuck each other in all kinds of combinations and situations, each one captured in HD for your viewing pleasure. With so few quality bisex hardcore sites around these days, BiMaxx has a great chance of grabbing the attention of any discerning bi-porn fan by the youknowwhats and keeping their eyes locked on its raunchy, risqué collection of hardcore bisexual fornication.

Overview:
One of the great tragedies of the pornography business is that there has traditionally been little fluid movement between the hetero and homosexual worlds unless two chicks wanted to get it on. Including depictions of female homosexuality in porn largely shot for straight men makes sense, but the exclusion of man-on-man action in what are already bisexually oriented movies quite simply reeks of homophobia. Thankfully, as women and gay men find larger viewerships as content creators, we're blessed with the existence of BiMaxx, a site produced by Tainler, which appears to be closely related to Tainster, one of the filthiest, most unsanitary-seeming porn network on the planet. BiMaxx's tour pages promise mobile device compatibility, a 300-scene-plus video archive, High Definition video formats, and regular updates to keep this very promising new site growing steadily. Finding quality bisexual hardcore in HD can be a real chore and, even if you do, a single site rarely satisfies completely. Does this mean you should make room on your fapping agenda for BiMaxx's uniquely appealing and broad-minded smut? If you're into watching bi sex unfold in graphic detail, it's a sure bet. For everyone else, though, BiMaxx could go either way. Why not tag along as I, Mr. Pink, extend a warm welcome to one of the few genuinely bi- and pan-sexual sites around? Who knows, it could be your new favorite - or mine!

Pros:
BiMaxx is home to many, many hot guys who are just as eager to slide into a tight, moist pussy as they are between muscular male butt cheeks. Notable guys include Dennis Reed, Giacomo, and Thomas Friedl, all of whom throw their hunky bodies into the fray and prove equal opportunity fuckers. And, given the chance, they'll more than make do without any ladies around.

Cons:
Clearly shot for a predominantly gay male audience, BiMaxx tends to show off the hunky guys just a bit more than they do the girls. There's also far more man-on-man action compared to sapphic sex, which seems far less important to the directors and performers. It'd be great to see a site effectively manage a more even bisexual hardcore collection.

Check out the model roster and you'll find plenty of dames but very few dudes. Actors are almost entirely omitted from the roster page while others still are misidentified or not even named on the scene pages themselves. Women are usually identified (and, as far as I can tell, correctly) and tagged accordingly, making it easy to find their other BiMaxx work; not so for the guys.

Lacking English translated subtitles for its scenes, BiMaxx isn't just hard to understand, it's fucking impossible. Thankfully, there's not always that much talking and the participants get right down to it. Other scenes, however, are dialog heavy and will merely confuse you (while likely encouraging a boner, naturally).

Better search and browse tools are required here. Although the keyword tags and category listings are helpful, they're not exactly the most sophisticated and you may soon find yourself running out of choices but still without the content you've been digging and digging for.

Conclusion:
The minimal direct competition facing bisexual hardcore sites seems to lead many bisex producers into thinking that any old smut will do. That, of course, is absolutely not true and fans of bi-porn are just as demanding as any hetero-porn fans. BiMaxx's 438-scene archive spans many combinations and arrangements of female and male bodies, giving the guys plenty of time to amuse themselves with the woman before turning to each other. HD videos capture the proceedings quite nicely at 1080p but occasionally seem to have been up-converted from a lower-res source. Updates are unsteady and infrequent, another issue that needs fixing, and navigation is problematic at best. Hell, if the competition weren't so crappy, I'd say BiMaxx was a bit weak, but bi-porn being what it is, BiMaxx is, practically speaking, a pretty damn good effort!