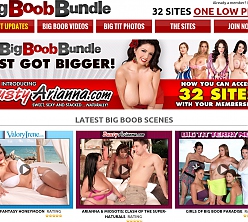 Overview:
Busty women populate the pornographic arts like sand particles populate the desert. So when you find a site promising nothing but overflowing bras and the women that more than fill them, it might not seem all that worthy of your attention. Big Boob Bundle, on the other hand, practically screams for the attention of tit-men, boob-lovers, and anyone whose eyes rarely make it above a woman's neckline, vowing to bring its paying customers a bevy of audio-visual delights centered around the heaving chests of such models as Eva Notty, Angela White, and Kerry Marie. The 32 top-heavy sites included in the titular bundle run from feature model showcases to, well, more model showcases. If you've ever found yourself enjoying the work of, say, super-thick Australian hottie Angela White and wondered on which sites all women prove as inviting and arousing as her, Big Boob Bundle is the answer to your needs. Alongside Ms. White you'll find Japanese Hitomi Tanaka, British Leanne Crow, and Ukrainian Sha Rizel all thrusting their chest in your face via 720p HD videos and high-res photo galleries galore. From the infamous Score Group, Big Boob Bundle, at $19.99-a-month, is impossible to ignore, in-bra or out.

At least three new updates land at Big Boob Bundle each week, bringing HIgh Definition 720p streams and downloads, and 1600px photo galleries that, like the videos, bring you all the titty-swinging, nipple-suckling action you can handle in a strong, clear presentation. Quality can vary from site-to-site, update-to-update, but overall is quite satisfying.

Although Score Group operates dozens of adult websites detailing everything from heaving bosoms to cock-sucking teens to aggressive cougars, Big Boob Bundle doesn't extend its members access to any of those sites nor the network they sit on. Big Boob Bundle is already a good deal, don't get me wrong, but extended Score access would really make it sing!

Big Boob Bundle's updates may have once been super-fresh and hot-off-the-monitor but content recycling is threatening to turn the network into a pornographic rerun station. Of the twenty most recent scenes and galleries to arrive, about half seem to have been shot years ago and simply presented again as a new update.

Many boob-focused sites keep their scouts searching for natural chests, not those artificially inflated by a surgeon, but not Big Boob Bundle. Not known for turning away any wannabe model bra size 30E-and-above, Big Boob Bundle instead features both natural and fake tits, the fake ones pushing the Bundle further into cartoonish territory.