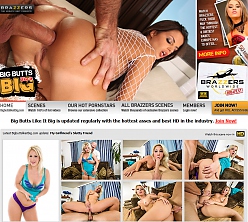 The 144 scenes currently held in Big Butts Like it Big's archive didn't get there overnight, they arrived once a week, every week since mid-2008; and, what's more, they still do arrive weekly. Each scene presents its particular scenery in high quality images. Videos can be streamed or downloaded and peak at 720p and 1080p resolutions, while photo galleries offer views (and zips) of 2500px. All content, save for a few older scenes, looks great.