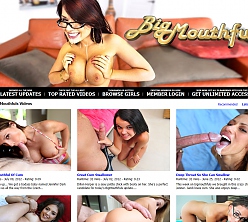 Shot in HD formats, Big Mouthfuls can now be viewed in online streams and downloads of 4880p, 720p, and 1080p, the best of which offer very crisp, very colorful viewing. Photo galleries reach 2000px and also bring you strong, detailed imagery. Both videos and photos can be viewed online or saved for later, local viewing.

Now discounted to $14.95, a BIg Mouthfuls membership should have you thrilled to bits with such tantalizing orally-inclined hardcore at your disposal. And, hey, if you're still hungry after this more-than-substantial meal, perhaps the rest of the Bang Bros network, 53 sites and a grand total of nearly 7,800 scenes!

Cons:
Big Mouthfuls isn't quite as reliable as you might hope. Updates appear to be on a rough weekly schedule that is known to skip one or two weeks on occasion, throwing expectant fans for a loop. It'd be great to see Big Mouthfuls, and really the whole Bang Bros network, keep its updates steadily on schedule.

Advertising litters the entire Bang Bros network and Big Mouthfuls sees more than its fare share. Promo graphics, GIFs, and banners shout at you while browsing, trying to drag your attention away from the wet-mouthed marvels you came here for. And, most annoying of all, most of the ads are for ridiculous "services" like WikiPenis (an expensive guide to "growing" your dick) or Blue Pill Men, an age-themed niche site very few will want to join.