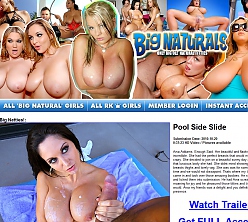 Without fail, each Big Naturals scene finds a way to focus on its featured woman's boobs. From suspenders that barely cover each nipple to teeny-tiny bikinis, cup-less bras, baby oil massages, nipple play, and titty-fucking, there's ample ogling of and playing with breasts here, as well as hardcore fucking. With a colorful, irreverent, and sometimes absurd style, Big Naturals is oodles of fun.

Making its home on the world-famous Reality Kings network means Big Naturals provides its members with access not just to its own content archive, but to that of every other Reality Kings site, too. And, with another 44 sites now within reach, a Big Naturals membership makes even more sense than ever before, especially now discounted to $17.95-a-month by yours truly, Mr. Pink!

Reality Kings long ago abandoned reality for an absurd take on vaguely realistic situations. Big Naturals can be even more absurd than most RK sites, and features such questionably-sexy introductory acts as dunking two pairs of tits in a tropical fish tank and break-ins turned cuckolding scenes.