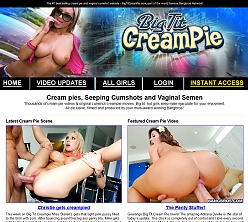 She's got a hefty rack - check! She's DTF before and after drinks - check! She'll let you shoot your load deep inside her… Woah, not so fast there, fella! Unless you've been snipped and can guarantee your partner's cleanliness, wear a rubber and use Big Tit Cream Pie to live out your insemination fantasies. It's safer, I assure you of that, and it's a Bang Bros site outfitted with stellar HD videos and some of the bustiest, nut-bustingest pornstar talent on Earth. No risk of an unwanted pregnancy. No risk diseases or infections. Just big tits and milk-fed pussies as far as the eye can see.

There's a bunch of ads taking up space and daring you to click them here at Big Tit Cream Pie. Where regular, obvious advertisements can be easy to ignore, these ones appear as regular content links and preview thumbnails. Click on them, though, and you'll end up unable to view your selected scene should it be part of the extended, but not primary Bang Bros network (Nalgas Grandes, Tetangas Espanolas, Dancing Bear, Haze Her etc).

Big Tit Cream Pie doesn't specify whether the titular tits are natural or bearing implants. Even a quick look through the archive will reveal a heavy dose of fake breasts, which is likely to turn off a number of all-natural-devotees.

Conclusion:
Since 2008, Big Tit Cream Pie has been producing a weekly dose of semen injection that see a big-breasted pornstar work a lucky dude into an orgasmic frenzy then invite him to blow not on her lips or tongue or face or chest or ass, but inside her snatch. While some guys shoot onto, not into their paired pussies, the effect is largely the same: a vicarious way to experience the most naked ending to heterosexual vaginal intercourse, one that many no longer pursue for fear of pregnancy and STDs. The women of Big Tit Cream Pie show off their ample curves in a variety of situations and scenarios - check the tour pages for many confidence-inspiring previews. Shot and delivered in HD (at a 720p resolution), videos are clear, colorful and both stream and download without issue. Really, there's little to actively dislike about a site that bucks the potentially humiliating eye-glueing facials in favor of something a little more traditional, but certainly no less hot.