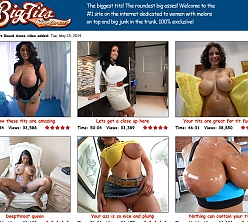 It'd be a damn shame to shoot such voluptuous women in anything but the best video formats available, and Big Tits Round Asses now manages High Definition viewing formats for all its movies. Reaching 720p resolutions, the downloadable MP4s and online streams present clean, detailed images, as do the 2500px photo galleries (both online and in downloadable zips).

There's quite a lot of top-quality boobage and assage here at Big Tits Round Asses, with 423 scenes and their accompanying galleries already waiting online for you. What's more, a new scene is added to the archive every Thursday, bringing either a brand-new or returning visitor and her incredibly inviting undulating fleshy bits to your screen.

Here at Mr. Pink's we always try to get our readers into the sites they love for less and now, with thanks to Bang Bros, you can access Big Tits Round Asses for a full month for only $14.95. Furthermore, every one of the 41 other Bang Bros site are included, expanding the number of killer smut scenes at-hand to an incredible 8,000-and-something!

Like all other Bang Bros-operated websites, Big Tits Round Asses shows plenty of preview links to other networked content. Some of it, however, will lead you to a dead-end. This is a result of Bang Bros extending its empire (but not its main network) to include Culioneros, Haze Her, CFNM Show, Dancing Bear and other endeavors not included in your access package.

Bang Bros has been producing 720p High Definition videos for some years now, but 1080p remains off the table for some reason. Even as competing networks pass 1080p and reach the incredible 4K resolution mark, Big Tits Round Asses lingers disappointingly behind.