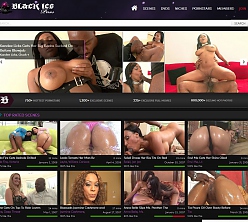 Overview:
If you're black in America, it could be justly argued that you're destined to face tougher obstacles than any other race. Not your own, of course (at least not by your own hand), but that of the system. African American's with powerful libidos and good physical fitness, however, have another option: Black Ice. One of African American porn's premiere studios, Black Ice produces hardcore porn both all-black and interracial, giving the best black studs and sluts in the business a stage on which to prove their talents. With the likes of Candice Nicole, Jada Fire, and Nyomi Banxxx appearing here in scorching hot scenes, you'd be mad not to consider throwing down the required $29.95 for a month-long membership, but why don't I investigate Black Ice Pass first and see what's it's really worth?

Candice Nicole, Jada Fire, Kandee Licks, Ms. Panther, and Melrose Foxxx (among other performers) finally get the attention and recognition they deserve at Black Ice Pass. They look great whether paired with black men, white men or each other, sucking and fucking in High Definition. The black models are joined by some notable white girls, too: Sarah Vandella, Jenna Haze, Kagney Linn Karter, and Kristina Rose among them.

Video fans are given plenty of formats and viewing methods to choose from here, with the clear winner a dazzling High Definition 1080p MP4. Strong detail, vibrant color, and sensible, atmospheric lighting gives the scenes' narrative and explicit elements great visuals. The photo galleries are also mostly impressive and can be viewed online or via the handy downloadable zips.

Instead of paying the usual $29.95 each month, Mr. Pink's readers receive a discount that sees them save $10 and enjoy free access to both ZTOD and Third Movies, the homes of Zero Tolerance and Third Degree Films. That's one hell of a bargain!

Cons:
It once seemed Black Ice Pass was running out of black women to shoot, but that period of predominantly interracial (white girl) scenes has apparently now stopped (or at least slowed). That influx of largely white scenes still stands in the archives, though, and is something of an oddity there.

Nothing new has been added to Black Ice Pass since July of 2011. The the two years since it's been quite dead here with featured scenes actively rotating and, well, nothing much else. Will Black Ice see new content added in the future? I doubt it, but let's wait and see.

Conclusion:
Ceasing all updates as of late July 2011, Black Ice Pass immediately lost its rightful place at the top of porn's African American hit list. Once a site teeming with activity, Black Ice Pass now sits somewhat gingerly on little more than 1,000 scenes and only 835 photo galleries. While that's hardly a pittance, it's certainly not as much porn as provided by Black Ice's betters. Because of the cessation of updates, content looks a little dated, though still strong in 720p and 1080p HD videos. The photos, however, are quickly falling behind and now look drab, lacking in detail and potency in their 900px frames. While I hold out hope for Black Ice Pass - a revitalization could be just around the corner - it doesn't exactly look promising.