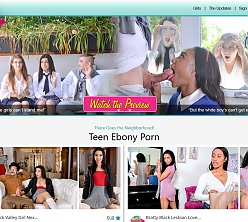 Overview:
Go back and watch any of those now-classic 80s teen movies, the ones with Valley Girls and midwestern prom princesses and all that shit, and find me some black girls - go on, try! Harder than perhaps you thought, huh? Well, actual social and economic segregation has caused endless tension among Americans but there’s a plan laid out online that could result in a smoothing over of interracial relations, a plan detailed by Black Valley Girls. This sic-fantasy - oh, it’s not? - sees daughters from affluent suburban LA families, foxy black daughters for the most part, throw their lips, laps, and asses at guys too scared (or pale) to roll through the ghetto. Corrupted family units and deviant high school and college students thrive in this lascivious environment, taking sexual satisfaction from whoever they want, whenever they want. Captured in brilliant HD containers, Black Valley Girls’ videos are colorful, carnal, and very entertaining, with lots of booty worship, cowgirl riding, and enthusiastic yelps of pleasure filling each encounter’s AV space. Much like the handful of other new, upstart Team Skeet ventures, Black Valley Girl remains a standalone entity but, with the likes of Maya Bijou, Loni Legend, and Harley Dean all waiting to drain some milky white balls, it’s one well worth a closer look.

Another sordid new Black Valley Girls adventure is added to the admittedly modest current collection - 23 scenes strong and counting! - every fourteen days. Sure, it’s not as active as many other Team Skeet sites but at least it’s chugging along at its own pace. Discounted to $14.87 per month, membership is priced just right.

No network package has been made available that includes Black Valley Girls. This site may be part of a throng of new Team Skeet-operated efforts all dealing in a particularly naughty niche arena - Teens Love Black Cocks, Bad MILFs, Ginger Patch, Dad Crush etc - but access to those sites, as well as to any of the mainline Team Skeet joints, remains off limits to Black Valley Girl subscribers.

Almost no information is provided with each new scene, at least not in the way you’d expect it to be. Model names are shown only in the scene synopsis text and no clickable link or model index page has been provided. Similarly, you’re left to scan the synopsis for any mention of sex act you’re particularly interested in.

Black Valley Girls runs on a pretty odd premise. Suggesting that young African American women in upwardly mobile families are basically street-level slags at heart, and that black families succeeding in society are riddled with borderline psychotic lust-filled teen and twenty-something girls intent on disgracing their family and its achievements, well, it can throw a slightly weird political patina on top of your fap session.

Conclusion:
If you dig school uniforms, welcome! If you’re into flirtatious teenage trysts while mommy and daddy are dozing on a Sunday afternoon, enjoy! Most importantly, though, if you’re into African American girls, this is the joint for you! Well, as long as you’re content with plenty of time devoted to plot lines and establishing a cheating pr otherwise forbidden sex scenario, and with a small but tasty archive that only grows by two scenes each month, Black Valley Girls should have you salivating and saving your cyber dollars for membership. (Though, with the current discount, there’s really no need to.) The often lengthy setups can be quite fun to watch but once those fiery looks are exchanged the real excitement starts. Reality-based - though that’s really stretching it - scenarios deliver lots of talk of cheating of boyfriends and girlfriends, parents finding out and being furious, posh private schools being too constraining for a young female libido… that kind of thing. It’d be great to see more navigation options as the current apparatus is, frankly, barely usable. Network access to either Team Skeet or its small cadre of step-cest and “nuevo reality” sites hasn’t been included, which is also a damn shame. It may be hard to argue for Black Valley Girls membership when the site holds only 23 scenes, updating every fortnight, so I’ll simply say that it’s one to really keep an eye on.