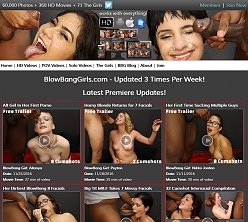 Each woman sucks dick differently and those working their way through the cock gauntlets of Blowbang Girls are no different. Some women thrash their heads back and forth and spit mid-stroke while others wrap their hands around the guy's thighs and pull him in gently, using her tongue to coax him along. Some women, Elyce Ferrara for example, and undoubtedly some of the hottest oral performers to come along in years.

A simple setup often means a simple delivery system lacking finesse, but that's not exactly the case at Blowbang Girls. Sure, the site looks a little dated, but the High Definition videos bring every lobbed jizzbomb to your screen in 1080p downloadable MP4s and 540p streams and capture the girls as they scoop up every drop, feed themselves what landed on their hands, and show their cum-covered body to the camera.

Cons:
The rough hewn style of Blowbang Girls suits its premise of an everyday woman ducking inside a secretive location where up to a dozen cocks are waiting to fill her mouth and cover her face and torso with spooge, but sometimes this visual style can make Blowbang Girls seem closer to an utterly amateurish attempt by some middle-aged horndogs to shoot some super-low-budget smut.

Not yet home to what you'd call a huge collection, Blowbang Girls hosts less than 100 episodes of its main event, all other videos acting as alternate takes and angles, not new encounters. It'd be fantastic to see a solid influx of two new knob-gobblers every week and less recaps, compilations, and highlights.

Elyce Ferrara is easily one of the most natural, gifted, and honestly, simply attractive adult performers to arrive in recent years. Her devotion to each and every cock makes her Blowbang Scenes thrilling viewing, but I can't help but feel this incredible woman is still being underutilized. How about an all-Elyce bonus site?

Conclusion:
Even though Blowbang Girls lacks much photo content, hasn't seen more than one hundred women works its stage, and often plays like some middle-aged factory workers decided to go family-style on a foul-mouthed bartender in the stock room during an after working boozing session. Strangely enough, it works wonders Blowbang Girls and its already marvelous women. Sure, some are stronger, more confident performers than others and some eager gulp down and play with every last drop of semen while a few seem reluctant to, like, get it on their necks or something, but most scenes deliver some pretty fucking epic oral trains and mouth-sharing moments. A few women in particular show devastating prowess with a penis, routinely making guys cum in a few minutes, their faces smeared with the last few guys' loads. Elyce Ferrara is deservedly the highest rated woman according to Blowbang Girls's members. A naturally curvaceous raven-haired harlot, Elyce's cheerful demeanor and open attitude easily makes way for her giggling, ultra-enthusiastic draining of nine consecutive anonymous cocks. A shining example of the naturally occurring super-sluttery lurking inside many seemingly everyday women, the incredible Ms. Ferrara is a also great example of the power of Blowbang Girls.