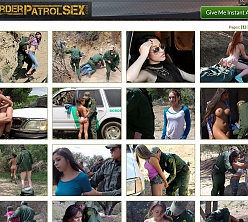 Immigrating to the United States isn't as easy as many citizens think. You can't just ask to become a lawful resident of the USA without some kind of sacrifice. For the young foreigners seen on Border Patrol Sex, that sacrifice is sex. Found crawling in the dirt after getting through a chain-link and razor-wire fence, the girls are almost out of options until the agent that finds them makes a salacious proposal. Full of dirty Spanish talk, outdoor sex, and incredibly sexy (and desperate) women, Border Patrol Sex is, for all its faults, very, very hot.

Overview:
If you believe some in the political sphere, illegal immigration is right up there with our public health care, gay marriage, gun control, and the rights of women and non-whites as one of the greatest threats to the stability of these United States. Hogwash! The only thing illegal immigrants are threatening is the dominance white women have over us "native born" citizens. Take a look at one of the government's efforts to curb border-jumping: Border Patrol Sex. Ok, so the guys patrolling this arid southern Californian landscape might not officially be part of Homeland Security, but they're uniformed, armed, and eager to clamp down on Mexicans crossing into the USA without visas - especially if they're sexy female Mexicans. A highly irreverent site, Border Patrol Sex makes a parody of both the Department of Homeland Security and those incapable of a run through the underbrush with The American Dream™ their destination in very sexy fashion, pitting guard against lone female infiltrators who'll do almost anything to gain access to the United States - and I don't just mean tepid handjobs. The dusty, dirty, thirsty women of Border Patrol Sex don't have a lot of options left - and that's good news for dominant dudes everywhere with $29.95 to spare.

Pros:
Boasting an intriguing setup, Border Patrol Sex is very entertaining (in a vaguely insulting kinda way). Patrolmen traipse around our national borders in search of lone desperadoes, families, and packs of people brought over by coyotes (people-smugglers). When they find a foxy young woman, they pull her aside, ask some questions, then explain how she can get out of her current predicament. Really, it's a lot like COPs.

Presenting its videos in High Definition streams and downloads, Border Patrol Sex generally offers good views of its outdoor hookups, peaking in 1080p MP4 downloads. There's minimal photo content here - if the scenario is to be believed, we should be grateful there's anything at all - so members will have to make do with the imagery captured in videos.

All Border Patrol Sex members receive a huge helping of bonus content in the form of licensed video feeds. There's some 14,000 adults DVDs waiting to be streamed, including many titles from Vivid, Combat Zone, and Filly Films, among many other studios.

Cons:
Border Patrol Sex sports one of the weakest and most unwieldy website designs I've come upon recently. Essentially confined to one long page, every scene and its previews displayed in a vertical list, Border Patrol Sex's archive could definitely be more suitably hosted. That said, with only 15 scenes online at this time and it's pretty hard to get lost.

Treated seriously, this site depicts gross abuses and misuses of power, rampant discrimination against foreigners whether breaking the law or not, and even pulls automatic weapons on suspects in scenes that could trigger hurtful police- and race-related memories for those who've dealt with such situations in the past.

Conclusion:
Taking members deep into the no-man's-land of the SoCal/Mexico border, the inventive folks behind Border Patrol Sex unfortunately forgot to shoot more than fifteen episodes of their race-baiting little chaptered opus. They also forgot to cast actual Mexicans in most cases, even casting freckled redhead Alex Tanner and Thai starlet Lana Violet as border jumpers. The High Definition videos do reach 1080p, which is good to see, but the lack of photo galleries and puny collection of only 15 scenes makes it hard to recommend this site even to those keen on (shall we say) "foreign affairs". Basically sitting online in the hopes that someone desperate to ogle these models in male-dominated outdoor sex scenes will stumble upon the site and hand over thirty bucks, Border Patrol Sex doesn't have a whole lot to offer the average porn viewer, not at this stage.